UK Governments plan to use imported palm oil to generate electricity has run into opposition from campaigners, who are urging Ministers to reconsider the idea.

A Parliamentary committee is due to vote on 6 March on whether to accept Department of Energy and Climate Change plans to subsidise “green electricity”.

But Action for Sustainable Energy for Bristol, a city in the west of England, says scientists agree that the biofuels to be subsidised are not “green” as the Government claims, but are worse for climate change than the fossil fuels they replace.

ACSEB says biofuels like palm oil, which the Government plans to subsidise for 20 years, will make climate change worse, destroy tropical forests and endangered species, and add tens of millions of pounds a year to voters’ electricity bills.

A study in the journal Science in 2009 described what ACSEB says is a basic weakness in the Government’s plans.

The authors explained in a summary: “The accounting now used for assessing compliance with carbon limits in the Kyoto Protocol and in climate legislation contains a far-reaching but fixable flaw that will severely undermine greenhouse gas reduction goals.

“It does not count CO2 emitted from tailpipes and smokestacks when bioenergy is being used, but it also does not count changes in emissions from land use when biomass for energy is harvested or grown. This accounting erroneously treats all bioenergy as carbon neutral regardless of the source of the biomass.

“For example, the clearing of long-established forests to burn wood or to grow energy crops is counted as a 100% reduction in energy emissions despite causing large releases of carbon.” 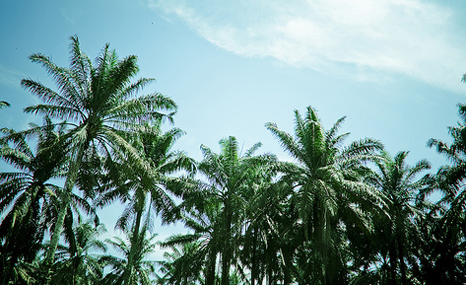 Indonesia has 6 million hectares of oil palm plantations, and plans another 4 million by 2015 dedicated to biofuel production (Pic: Flickr/Jktoo)

The subsidies are an essential part of the Government’s strategy to reduce greenhouse gas emissions, and there is pressure on Members of Parliament to vote them through.

They can accept or reject the plan they will be voting on only in its entirety. As it specifies subsidies for many other kinds of renewable fuels as well as palm oil, they may be unwilling to reject it. But ACSEB says the sustainability issue is of national and global importance.

It says the Government’s plan takes no account of the vegetation present before the land was cleared and planted with palm oil, nor of the need to grow food crops displaced by the fuel crop elsewhere.

It adds: “Many oil-palm plantations, carved from the rainforest, are planted on peat, which can then release greenhouse gases for centuries” (and see our story of 30 January, “Tropical peatlands ‘haemorrhage’ fossil carbon”).

It is not only the risk of increasing emissions that worries the campaigners. In several parts of the world palm oil producers have been accused of significant human rights abuses, including forced evictions, rape and murder.

Growing palm oil (and some other sorts of biomass) can be dangerous for many species as well.

The UN Environment Programme’s GRID-Arendal centre at Arendal in Norway says in Last Stand of the Orangutan: “…the rapid increase in plantation acreage [of palm oil] is one of the greatest threats to orangutans and the forests on which they depend.

In Malaysia and Indonesia, it is now the primary cause of permanent rainforest loss.”

ABSEC says entire eco-systems are being destroyed by palm oil plantations, critically endangering not only orangutans but key species like the Sumatran tiger and the Borneo pygmy elephant.

In February, 14 of these rare elephants were found poisoned.

The campaigners are worried because planning permission has already been granted for palm oil-fuelled power-stations at Avonmouth, close to Bristol, and at Portland on the English Channel coast.  Another is planned for Shoreham-by-Sea, further east along the Channel in West Sussex.