Britain’s Prime Minister has struggled to live up to his promise to run the “greenest government ever”, but a consolation is he does now reside in one of the UK’s most environmentally friendly buildings.

Today 10 Downing Street, built in 1680, received a BREEAM (BRE Environmental Assessment Method) special award for the building that has made the ‘most improvement year-on-year’

In recent years Downing Street, which has housed British Prime Ministers since 1735, has undergone a number of improvements including new boilers, rainwater collection facilities, low energy lighting and increased insulation.

100% of the Prime Minister’s electricity supply is on a green tariff, generated from renewable sources. Since 2009 the residence’s display energy certificate has improved from E to D. 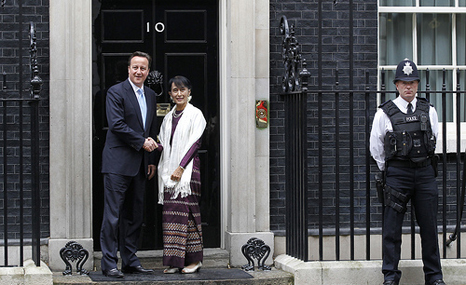 To be considered for an award a BREEAM assessment must have achieved at least an ‘Excellent’ rating and show that the building (for an interim assessment or final construction assessment) has excelled in every environmental category (from Energy to Ecology).

The award gives David Cameron an edge over US President Barack Obama, who has come under fire recently for failing to deliver his promise to install solar panels at the White House.

Obama  planned to install panels by the spring of 2011, generating 19,700 kilowatt hours of electricity a year.

He also announced he would also install a solar hot water heater on top of the living quarters at 1600 Pennsylvania Ave.

“By installing solar panels on arguably the most famous house in the country, his residence, the president is underscoring that commitment to lead and the promise and importance of renewable energy in the United States,” said Nancy Sutley, chairwoman of the White House Council on Environmental Quality.

So far it is unclear whether the panels or water heater are operational.