The Energy and Climate Change Committee report, Building New Nuclear: the challenges ahead, warns if plans for 16GW of nuclear power collapse, it is likely that fossil fuels would fill the gap.

It says the subsidies offered to nuclear operators are too generous, and in a damning indictment of the Department of Energy and Climate Change claims there is no ‘Plan B’ if current plans flop.

At present EDF Energy is the only company committed to investing in nuclear plants in the UK.

“If new nuclear power stations are not built on time, our legally-binding climate change targets will be extremely challenging and much more expensive to meet,” said committee chair Tim Yeo.

“The Government seems to be crossing its fingers that private companies will deliver a fleet of new nuclear power stations on time and on budget.

“Ministers need to urgently come up with a contingency plan in case the nuclear industry does not deliver the new power stations we need.”

The 2008 Climate Change Act obliges the UK to adopt a series of legally binding carbon budgets, with an ultimate aim of reducing greenhouse gas emissions 80% by 2050. 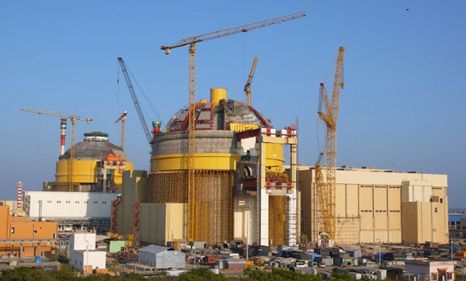 The UK currently gets 19% of its electricity from nuclear power, but all but one of its nine plants are slated to close by 2023.

Government plans for 16GW of new nuclear were hit last March when energy companies E.ON and RWE npower announced that they would not be proceeding with plans to develop new plants.

In February 2013 Centrica announced it was also pulling out of new investment in two plants, leaving French-owned EDF as the sole company committed to building new reactors in the UK.

The programme was dealt a further blow when Cumbria County Council voted against proposals to develop an underground nuclear waste storage facility.

The Department for Energy and Climate Change’s ‘low cost’ plans for low carbon energy up to 2050 include up to 40GW of nuclear power, together with 1,400 offshore and 4,400 onshore wind turbines.

To place this in context, a Friends of the Earth scenario without nuclear requires 10,000 offshore and 8,000 onshore wind turbines in 2050.

The committee warns that if current proposals fall through, future nuclear investments in the UK would be fatally undermined.

“This would make it likely that future projects would not be able to raise the necessary capital, raising the prospect that it would not be possible to build any further nuclear plant without state funding,” it reads.

Nuclear reactors typically cost £7 billion, although are relatively cheap to operate once completed, unlike fossil fuel plants which require daily deliveries of fuel.

Government attempts to incentivise potential partners have led to accusations that nuclear subsidies vastly exceed those given to other forms of energy such as solar or wind.

The report comes at an awkward moment for the government, which is attempting to push a new Energy Bill through Parliament.

The bill is already under attack for omitting a 2030 power sector decarbonisation target that would see the UK fall in line with the recommendations from the advisory Committee on Climate Change.