Conflict and instability caused by climate change are likely to impact the UK in the future, the country’s new top climate diplomat has warned.

Neil Morisetti, the British Foreign Secretary’s new Special Representative for Climate Change, told RTCC he plans to devote a substantial part of his role explaining the potential security threats of global warming to the public.

“You could argue in northern Europe that this doesn’t affect us,” he said. “But the reality is we live in a globalised world, and we’re very much dependent on other parts of the world for our own well-being and our own prosperity.

He added: “We need to do more to mainstream the impact of climate change, for people to understand that this is not a peripheral issue, this affects all of us.” 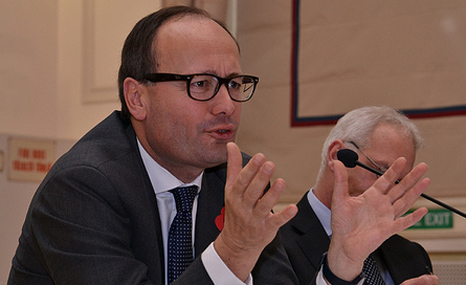 As Special Representative Morisetti reports directly to Foreign Secretary William Hague, and will lead a network of ‘climate diplomats’ based in every UK embassy around the world.

Hague declared climate change a ‘top priority’ in 2012, in sharp contrast to many of his Conservative Party colleagues who do not believe it is a serious concern.

Previously the UK’s Climate and Energy Security Envoy, Morisetti is also a Rear Admiral in the Royal Navy, and commanded the aircraft carrier HMS Invincible from 2004-2005.

Leading military strategists have long identified climate change as a ‘threat multiplier’. In 2010 the Pentagon and the UK Ministry Of Defence both reported that instability and population migrations could follow rises in global temperatures and the resulting effects.

And earlier this week an influential group of US Generals and diplomats including former Secretary of State Madeleine Albright warned of the imminent threat of climate change in an open letter to US policymakers.

Specifically, Morisetti identifies the impacts of extreme weather on global trade as an example of how the UK could suffer in a warming world.

“If you’re seeing increased instability in those parts of the world, those are places where we see our resources coming from – energy for example, volatility and prices, impacts on our ability to be competitive,” he said.

“We’ve seen extreme weather events – the impact on floods in Thailand in 2011.

“Not only were the Thai population affected and rice yields, but parts for Toyota and Honda cars used for manufacturing – Honda in Swindon was also affected. Similarly, micro-chips in Orange Country California and in Poland, a shortage of PCs in the run-up to Christmas.

“In other words it’s a globalised effect and therefore, particularly as you see the world’s trade routes pass through the middle of that.

“Every nation I have visited in my previous role as the UK’s Climate and Security Envoy and in my naval career is a trading nation, and that’s why we’re all affected by it.”

His predecessor John Ashton won praise for his unrelenting efforts to make the economic case for low carbon growth during his six-year tenure.

Morisetti says that together with climate security, he aims to promote Britain’s growing green sector, working closely with business to highlight success stories at home and abroad.

One particular set of achievements he is keen to highlight are the energy efficiency savings achieved by the British Army and Navy.

In response to punishing attacks on fuel convoys in Afghanistan, the Army invested heavily in solar panels and efficiency. Morisetti says the aim is to reduce the amount of fuel in main operating bases by 50%.

VIDEO: What is the UK military doing about climate change?

Neil Morisetti from Responding to Climate Change on Vimeo.

And he says the new range of Royal Navy destroyers and frigates have also been designed with fuel consumption in mind, unlike their ‘gas guzzling’ US counterparts, pointing out that while commanding an aircraft carrier he was given a ‘fuel allowance’ per month.

“The military have always needed energy. Napoleon needed fodder, Patton broke out in Normandy, raced out across France and came to a grinding halt because he had run out of fuel,” he said.

“We use huge amounts of fuel and in places like Afghanistan it had to be brought in via convoy. That had a cost factor – a financial one – but lives have been lost, it risks our ability to do business and constrains our outputs

“Both here in the UK and in America a lot of work has gone into being more energy efficient, having a plan that drives down use but also using alternative energy where appropriate, such as solar blankets.”

While the US and UK cooperate closely on military matters, this is less evident when it comes to the environment or specifically climate change.

Morisetti declined to comment on whether Foreign Secretary William Hague and US Secretary of State John Kerry discussed climate change in their first official meeting this week.

But with the 2015 deadline for a global deal to curb emissions fast approaching, he indicates he would be keen to see the two countries work together on this issue.

“Both Secretary Kerry and President Obama have talked about the importance of addressing climate change – we’ve seen correspondence from large parts of American society for action,” he said.

“There’s a lot going on in America at state, local and regional level – it needs to build momentum now and see action to follow the statements from the key players.”