In what could prove a controversial submission to the UN climate agency, the UNFCCC, it proposes reclassifying nations from rich to poor and vice versa.

It also suggests that it believes more nations should contribute climate finance as efforts to raise $100bn a year continue.

The UNFCCC divides nations by their wealth as it was more than 20 years ago, and agrees to base actions on “common but differentiated responsibilities and respective capabilities”.

Many major emerging economies such as Brazil, Mexico, Qatar and Saudi Arabia are currently in the same category as the world’s poorest countries. 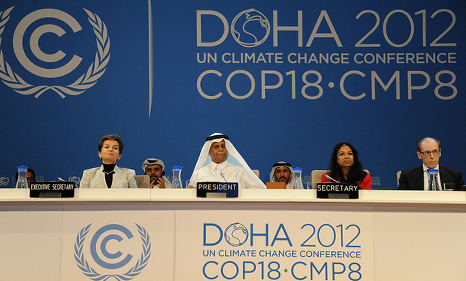 Ethiopia has suggested a mechanism to assess how much countries ought to contribute to global efforts to reduce emissions (Source: Flickr/UNFCCC)

Wealthy countries listed in Annex I of the Convention agreed to adopt national policies to reduce emissions. Those also listed in Annex II committed to providing financial assistance to other nations.

“It is not only the greenhouse gas emissions of some developing countries that have dramatically increased since 1992. Their economies have also grown substantively,” reads the Ethiopian proposal.

“Therefore, there is a global need to raise ambition for countering climate change more collectively than was seen as necessary in 1992.”

It suggests a uniform equation assessing a whether a nation has run out of its “atmospheric space” or put simply, its population has emitted more than its fair share of greenhouse gases.

Those that have would be classified as Annex I and required to reduce their emissions, along with the wealthy nations from the convention’s signature.

A similar review would be conducted to see if GDP and GDP per head of population were sufficiently high for that nation to take on financial commitments to help others reduce emissions.

A similar plan was proposed by Russia in 2011 ahead of the summit in Durban but was rejected out of hand.

It could be more warmly received coming from Ethiopia, which has a reputation for a being relatively progressive on climate change and renewable energy.

The country is keen to exploit its geothermal resources for its own benefit and  that of the region.

The EU has stressed that a global deal needed China and other big emitters to be involved if we are to have an adequate deal.

“All countries, developed and developing alike, need to take on commitments that have equal legal weight. Developing countries, led by China, already emit more greenhouse gas than the developed world and by 2020 it is estimated they will be responsible for around two-thirds of global emissions,” he added.

“The EU would have liked to see the new system in place very much earlier. But many of the big emitters were not ready for that yet. In accepting the Durban outcome they have agreed to be ready by 2020 at the latest.”