In the west of the region, arguments between Pakistan and India over vital water resources in areas bordering the two countries continue.

In the east tensions are rising as India expresses concerns about a spate of planned dam-building projects by China on rivers flowing into Indian territory, particularly on the mighty Brahmaputra.

Meanwhile Nepal and the north Indian state of Bihar accuse each other of mismanaging water resources that straddle the border.

Regional cooperation is limited and, in many areas, non-existent.

In some countries data on vital environmental factors, such as river flows and management, falls into the category of national security and is closely guarded.

The International Centre for Integrated Mountain Development (ICIMOD) was founded in the early 1980s and based in Kathmandu, Nepal’s capital.

It is the only intergovernmental body gathering cross-border environmental information and monitoring climate change across a region stretching from the mountains of the Hindu Kush and Afghanistan in the west to Yunnan in southwest China in the east. 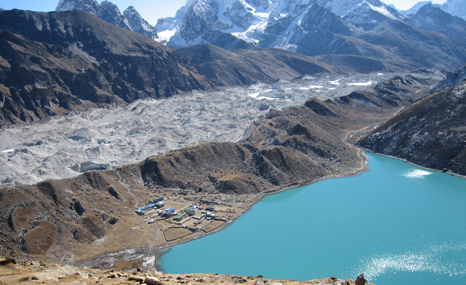 It’s an area described as a climate “hot spot”, with temperatures in many parts rising faster than the global average.

In an ambitious project, ICIMOD has over recent months been trying to gather information on communities’ attitudes and responses across the region to climate change and socio-economic factors which are affecting their livelihoods.

More than 6,000 households – mainly in mountain areas – have been involved in responding to a detailed questionnaire.

“Results are still being carefully analyzed and documented”, says Valdemar Holmgren, a climate change adaptation specialist at ICIMOD. “But early indications from one area in Nepal clearly show people are fully aware of changes in climate patterns.”

The survey indicates that more than 80% of households in the Koshi river basin in the east of Nepal notice a change in temperature, while about 90% note changes in rainfall.

“Seasonality is not the same as it used to be”, says Holmgren. “In many areas farmers are changing crops in order to adapt to changing climate conditions. But for many it is very hard.”

Often, say specialists, climate is not the sole reason or the driving factor in people altering their way of life.

“In many mountain communities climate change might not be, at present, the central problem”, says Holmgren.

“Outward migration of the men in search of work is a big issue, with women left to do the work and manage the family finances. Changes in climate become an additional pressure on communities struggling to cope.”

“The climate is increasingly erratic. In between days of rainfall there are long, dry periods”

Exactly how much climate change is occurring in the Himalayan region is a matter of considerable debate.

The gathering of data across such a vast and inaccesible region is a complex business, made more difficult by regional suspicions and rivalries.

A recent report by the United Nations Environment Programme said that between 1982 and 2006, the average annual mean temperature in the region increased by 1.5˚C, with an average increase of 0.06˚C per year although, said the report, “the rate of warming varies across seasons and ecoregions.”

Dhrupad Choudhury, an ICIMOD programme manager, says that within Nepal change is evident, though it manifests itself differently in various parts of the country.

“Communities clearly see a reduction in the duration of rainfall. The monsoon is arriving later in the west of the country, while in the east it is completing earlier.  This means that in some areas crops wilt and production falls.

“The climate is increasingly erratic. In between days of rainfall there are long, dry periods – overall the perception is that production has gone down across the region.”

Finding out how communities are responding and adapting to changes in climate is a vital part of ICIMOD’s work.

But it has to tread lightly in a region which is among the most climate-sensitive but also conflict-ridden in the world.