Poland, the host of the 2013 UN climate change conference, has confirmed to RTCC that it is accelerating the development of its shale gas reserves.

A report by energy consultancy Pöyry and the UK’s energy regulator Ofgem identifies the country as having the greatest potential for unconventional gas exploration in the EU.

Poland’s government is now looking to deliver on that as soon as it can, and it argues that it can do so without harming the climate.

“Our goal is to start natural gas production from shale formations as soon as possible. Till now, there were 113 licences granted and more than 40 wells were drilled,” Paweł Mikusek, spokesperson for Poland’s Ministry of Environment told RTCC.

“This is still not a sufficient number to think of a wider scale shale gas production. Nevertheless we are convinced that a very friendly and stable tax regime to be settled soon and to be presented by the Ministry of Finance can change this.

“Easing bureaucratic barriers proposed by the Ministry of Environment in the draft bill last week, will also help accelerate the process and make the drilling program far more advanced already by 2015,” said Mikusek. 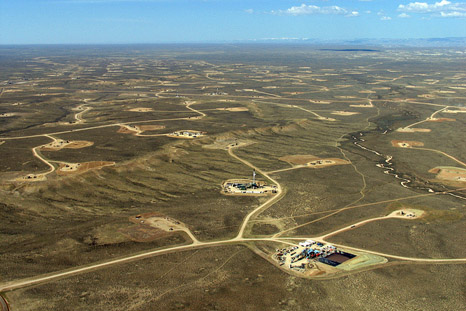 The Jonah gas field in the US where shale gas has boomed in recent years. (Source: Flickr/SkyTruth)

Poland will assume huge diplomatic responsibility for the climate change agenda this year as Warsaw hosts the next round of the UN negotiations.

Environment Minister Marcin Korolec, a vocal backer of shale gas, will serve as President of the talks.

He has clashed with EU colleagues in the past on a number of issues including reforms to the bloc’s carbon market, the surrender of emissions allowances and the adoption of a proposed low carbon roadmap for 2050.

Studies on the scale of methane gas leaks from shale drilling operations have produced a range of results. A controversial Cornell University study offered the highest estimate suggesting 4% of all gas leaks into the atmosphere. Methane warms the atmosphere 72 times more per volume than CO2 during a 20 year time period.

Research by Princeton University suggests this figure must remain below 3.2% to make gas more beneficial to the climate than coal.

“Making energy expensive will not solve our problems. We are trying to point out that shale gas is needed in Europe to implement affordable climate policy.

“GDP per capita differs across the EU and so does the share of home budgets spent on energy. We need shale gas to make CO2 reductions cheap, as the USA managed to deliver,” he added.

The USA has witnessed a boom in shale gas production that has enabled it to reduce emissions by 4.6% in 2011 alone, by replacing coal-fired electricity generation.

A report by Bloomberg New Energy Finance released on Thursday claims it will not be easy to replicate the US success story with the cost of drilling in the UK potentially more than double that of the US.

Shale gas is obtained by hydraulic fracturing, or fracking, which involves drilling into rock formations and injecting fluids at high pressure to open up fissures releasing the gas.

The US “shale revolution” has been dogged with controversy surrounding tremors linked to the process and concerns about potential tainting of freshwater aquifers from gas and the liquids that are forced into the formations. Some states, including New York, banned the process outright.

Poland has announced plans to remove the need for permits on exploration shale gas wells dug no deeper than 5km.

Despite this Mikusek says Environmental Impact Assessments will continue and drillers will be forced to disclose the chemicals they use in the fracking process, a condition that is not mandatory in all US states.

With a dependence on coal for 92% of its electricity generation, particularly brown coal or lignite, a lower grade, dirtier fuel, Poland has often sought to protect its domestic circumstances during EU climate and energy policy negotiations.

It believes high carbon prices and ambitious climate targets applied across the 27-member bloc would be disproportionately punitive to coal-based economies that are still in transition.

Mikusek says Poland and other central European nations that joined the EU in 2004, are in a very different circumstance to their European neighbours and that fact should not be forgotten.

“We rely on a historical network of energy supply that was east-oriented. And therefore when energy policy is discussed [at the EU] these concerns are well represented. I wouldn’t go as far as saying though that they are adequately considered. There is a room for improvement there,” said Mikusek.

“Poland is perfectly placed to host the COP,” argues Mikusek.

“We got very good marks for Poznan and we are one of the countries that underwent a transition from developing economy into a developed country with 30% GHG reduction under Kyoto. We know arguments from both sides. This process needs someone who can speak the languages of the EU and the developing world. We can.”