Climate and Clean Air Coalition can cut warming by 0.5°C

The Climate and Clean Air Coalition (CCAC) could reduce warming by 0.5°C by 2050, but its work must be done alongside deep cuts in CO2, according to its interim chief.

The coalition was founded a year ago this week by the USA, Canada, Sweden, Ghana, Mexico, Bangladesh and the UN Environment Programme (UNEP) to target reductions in methane, black carbon (soot), and Hydrofluorocarbons (HFCs), three potent greenhouse gases.

Many questioned whether the work of the CCAC would contribute to progress on climate change, or if it would be a facade for heavy emitters like the USA to avoid making wide-ranging commitments at the main UN climate talks.

But speaking to RTCC, Kaveh Zahedi, interim head of the CCAC secretariat stressed that the group’s work is not about ‘buying time’ for a global deal to reduce CO2 emissions, rather he says it is an effort to address the issue on all fronts.

“The Minister of Environment from Norway said his county is very concerned with climate change and they see the CCAC as a first aid kit,” he said.

“It doesn’t buy us any time, action has to be complementary to work to reduce CO2. But it could bring us relief in terms of the trajectory of climate change and it could reduce warming by 0.5°C by 2050. For vulnerable countries like the Maldives, that is everything.” 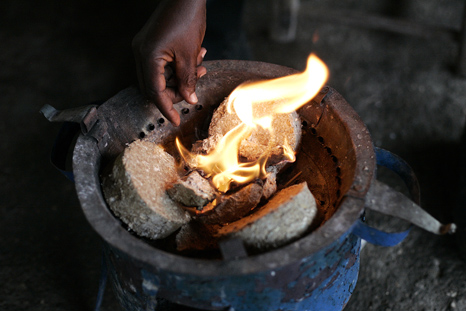 Replacing kerosene stoves with cleaner alternatives is one of the core activities of the CCAC. (Source:UN/Sophia Paris)

Methane, black carbon and HFCs are all short term climate forcers. They have a greater warming impact on the atmosphere than CO2, but stay there for shorter period of time.

The CCAC has focused on several projects during first year including diesel emissions, methane leakage in the oil and gas industry and solid waste disposal.

“The CCAC is very much about the near term. If we do that and that alone, we won’t impact on climate change in the long term,” he warned.

While progress to tackle a basket of six greenhouse gases through the UNFCCC has been painstaking, the CCAC has ballooned from six to 55 member governments in a year.

The list of participants is a curious mix of developed nations, progressive Latin American states and a smattering of African countries. Notable absentees include China, India, Russia and Brazil.

Kevin Hicks of the Stockholm Environment Institute (SEI) says there are added incentives for governments to take part in the CCAC and fewer barriers than at the UNFCCC.

“The attractive thing is that the CCAC is a non-binding, voluntary organization, which is a very different form than the UNFCCC,” he said.

“Countries see that they can achieve multiple public health, food and energy security benefits, as well as near term climate benefits, with clear linkages to development agendas.

“Actions on short term climate pollutants can be cost effective and pay for themselves over time. The challenge now is to scale up that work and to make sure it is complementary to enhanced action on long-lived GHGs such as CO2.”

Zahedi and Hicks both note the importance of the local benefits cited by governments looking to join the programme.

“Countries that are coming on board are doing so with an growing emphasis on their own local issues. But they are joining forces to tackle these problems as a collective,” said Zahedi.

“Today Kenya has expressed its interest in joining the CCAC. They talked a lot about the health benefits, cook stoves, agriculture, that’s the way they see this challenge. Other countries will have a different emphasis, perhaps the phase out of HFCs”

When it was originally launched NGOs gave the initiative a cautious welcome, while warning that developed world governments should not hide behind their work with CCAC when challenged on their record at the UNFCCC.

Hicks argues this accusation does not entirely stand up.

“[The CCAC] does not distract from the UNFCCC efforts as action on short term forcers is often linked to actions countries would be taking any way to improve air quality,” he said.

“They often tackle different parts of sectors to CO2 measures such as biomass fired cookstoves for domestic cooking and heating rather than the power stations targets by action through the UNFCCC.”

The BASIC group of major emerging economies, Brazil, South Africa, India and China recently identified black carbon as an area of interest. RTCC understands this has been met with suspicion from some in the European policy community.

A global CO2 emissions deal including all nations, not just the wealthiest that made commitments in the Kyoto Protocol, is scheduled to be agreed by 2015.

To have any credibility, it will require the BASIC countries to make legally binding, CO2 emission reductions.

That’s a much harder sell than voluntary targets, and even UNEP chief Achim Steiner, for whom the CCAC has been something of a personal triumph, acknowledges that ultimately the focus on short term pollutants it will not be enough.

“In respect to climate change, it might assist in keeping a global temperature below 2 degrees C but only for so long,” he said.

“Unless there is also decisive action on carbon dioxide, then reducing all sources of short lived climate forcers will not spare the world and its people from dangerous climate change over the 21st Century.”