It finds that since the introduction of a carbon tax in July 2012, electricity generators have passed on over 100% of the carbon price to retailers, while keeping $1 billion in cash compensation payments aimed to help heavy polluters make a transition to low emission generation.

Environment Victoria’s report cites figures from Australia’s Energy Market Operator, which suggest prices have increased by AUS$21 per MWh since the tax was implemented.

It warns that unless compensation payments from the Energy Security Fund are reviewed, generators could make windfall profits between $2.3 billion to $5.4 billion, depending on a future carbon price.

The Australian government rejects the report’s findings, saying it is driven by “ideological opposition to any form of brown coal fired generation”. 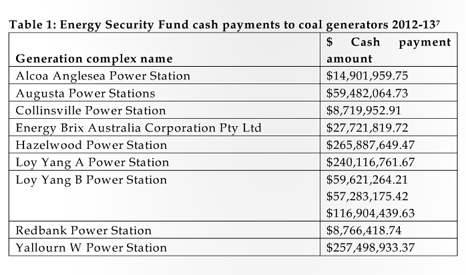 Brown coal accounts for 92% of electricity production in the state of Victoria (Pic: Environment Victoria)

Environment Victoria’s Mark Wakeham says consumers are “paying twice”, once for the tax transfers to major emitters, and also through their utility bills.

“Given this new evidence, it is critical the Gillard Government reviews the Energy Security Fund compensation to maintain the integrity of Australia’s carbon pricing package,” he said.

“The Gillard Government never intended for the compensation payments to be used as windfall profits but that appears to be what’s happening.

“Taxpayers should not be funding polluting activities and making our dirtiest power stations more profitable.”

Wakeham wants the government to review compensation payments to generators during forthcoming federal budget discussions. The next payment is scheduled on September 1.

Report author Bruce Mountain, from consultancy CME, based his findings on figures from the state of Victoria, the second most populated state in Australia.

“In the first six months since the introduction of the emission price, generators in Victoria seem to have been able to pass on all of the cost of the emission permits, through higher electricity prices in the spot market,” he said.

“Assuming the generators are able to pass on a similar proportion of the carbon price in future, the Victorian brown coal generators, which receive over 90% of Energy Security Fund payments, can expect to accrue additional operating profits somewhere in the range of $2.3bn to $5.4bn (Present Value) depending on emission prices in future.

“Others warned against compensation payments for generators stating they were unnecessary. The level of pass-through that has been observed so far has been unexpectedly high, and seems to vindicate their concerns.”

Not all analysts agree with these findings. A response from Frontier Economics entitled Mountains from Molehills argues that ‘six months is an insufficient sample to draw any meaningful conclusions’.

In a statement sent to RTCC, a spokesperson for Greg Combet, Australian Climate Change Minister said the report was simplistic.

“The idea that the most emissions-intensive generators are passing through more than 100 per cent of the carbon price at the same time as market emissions were reduced by 8.6 per cent does not accord with logic, proper analysis of wholesale market data or the views of industry experts,” they said.

“In the first six months of the carbon price the Australian Energy Market Operator data demonstrates a 6% improvement in the emissions-intensity of generation in the National Electricity Market and a 2.7% drop in demand which have resulted in 7.6 million tonnes less emissions than the same period in 2011.”

Black and brown coal accounts for 75% of total electricity production in Australia (2010 figures), followed by gas and renewables.

Brown coal releases more carbon emissions than any other fuel, and is a major target of campaigners in Victoria as it fuels 92% of the electricity generated. More than 65 million tonnes are burnt every year.