Algae biofuel facades, solar power paint and robotic maintenance all feature in engineering giant Arup’s vision for the buildings of the future.

The firm’s Foresight + Innovation group has pieced together a of ideas to create a modular skyscraper capable of making the most out of a resource constrained world.

“By 2050, the human population will have reached 9 billion people with 75 per cent of the world’s inhabitants living in cities,” says Josef Hargrave, Consultant at Foresight + Innovation, Arup.

“We do not want to predict what the built environment may look like in almost 40 years’ time, but offers insight and inspiration for what could happen. 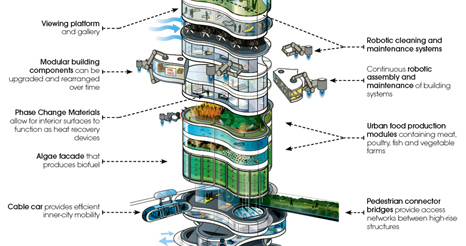 “This report explores the idea of intelligent buildings that are able to make informed and calculated decisions based on their surrounding environment – living and breathing structures that are able to support the cities and people of tomorrow”.

The end result is a modular sky scraper with solar, bio based fuel cells, fuel and wind power incorporated.

It uses renewable resources such as wood where ever possible, recycles grey water for an urban garden to help tackle food security issues.

Heat recovery windows and a membrane to convert carbon dioxide to oxygen also make the most of the building’s exterior.

A UN-Habitat study found that 70% of the world’s emissions come from cities making them a key battle ground for emissions reductions.

People are moving into cities at an increasing rate, especially in the developing world. By 2060, India will have an additional 500m people living in cities according to the 2011 United Nations World Urbanisation Prospects.

Lowering the impact of by encouraging sustainable transport, energy efficiency and low-carbon construction could allow cities to reduce their emissions by 70% using existing technologies alone.

Add in the innovations in from Arup’s building of the future and that figure could be even greater.

RTCC Video: Michele Acuto, from the University of Oxford’s Future of Cities Programme on the action already being taken by urban areas to combat climate change