Sound environmental policies are an insurance policy against an uncertain future,and should be framed as an investment and not a cost.

“You have a responsibility to articulate these truths and to help craft the policies and programmes that will benefit all people – and especially those most at risk from environmental degradation and climate change,” Ban said.

“To do so, you will need to engage closely with your counterparts in government to enable them to see that investing in the environment and a green economy is not a cost but a sound insurance policy for the future we want.” 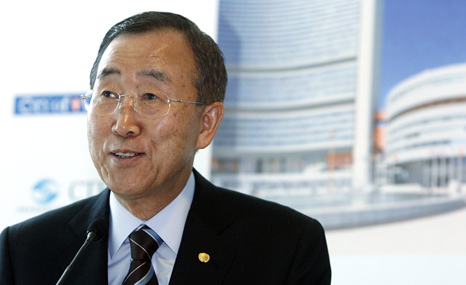 The new initiative, called a Partnership for Action on Green Economy (PAGE), will help countries develop policies to underpin the growth of clean energy, low carbon infrastructure projects and training for green jobs.

PAGE is a response to the outcome document of the United Nations Conference on Sustainable Development (Rio+20), entitled The Future We Want, which recognizes the green economy as a vehicle for sustainable development and poverty eradication.

The four agencies will now look to implement the principles established in that document in seven countries initially before expanding the programme to 30 countries by 2020.

“We cannot continue to ‘save the planet’, one species, one ecosystem, one policy, one issue, one law, one treaty at a time. Our challenge at the beginning of the 21st century has become a systemic one,” said UNEP Executive Director Achim Steiner

“Environment ministers have a mandate to protect the environment but increasingly their success in doing so will be predicated on their capacity to offer environmental solutions which create jobs, expand access to energy, address food security, reduce poverty and enhance livelihoods.”

To mark the launch, ministers and high-level officials dined on Kenyan grown food that was rejected by UK supermarkets due to ‘cosmetic imperfections’.

The dinner was a zero-waste event: guests were encouraged to doggy bag leftovers and many of the fruits and vegetables were donated to MCEDO, a community-based organization that runs a school with a feeding programme for 580 children in Nairobi’s Mathare informal settlement.

Tristram Stuart, food waste author and founder of Feeding the 5000, a key partner organization that has organized such dinners for years, said the rejection of good food by UK supermarkets was a massive issue in Kenya.

“It’s a scandal that so much food is wasted in a country with millions of hungry people; we found one grower supplying a UK supermarket who is forced to waste up to 40 tonnes of vegetables every week, which is 40 per cent of what he grows,” he said.

“The waste of perfectly edible ‘ugly’ vegetables is endemic in our food production systems and symbolizes our negligence.”

“But it is also a huge opportunity: by persuading supermarkets to change their standards, and by developing processing and other ways of marketing this produce, we can help to increase on-farm incomes and food availability where it is needed most.”

RTCC VIDEO: How Brazil is managing a transition to a ‘green economy’