British community energy groups are set for a boost after the Royal Bank of Scotland (RBS) revealed it is developing a new loan scheme specifically designed for them.

Groups formed from communities, schools and housing associations largely rely on raising the money locally or selling shares in the prospective profits of their project.

It can be difficult for them to fund wind and solar projects on this scale, cost as much as £700,000, but Ian Burrow, Head of Agriculture and Renewable Energy finance at NatWest and RBS told RTCC he was committed to ensuring this would be easier in the future.

“We’ve got a gap in our policy around community schemes, which we are working hard to plug by the year end,” he said. “At the moment we’d find it difficult to finance a community scheme but we would like to offer that to the market place in early 2014 without fail.”

A consortium including Forum for the Future and the Co-operative Group predicts that as much as 3.5GW of community power could be installed in the UK by the end of the decade – given the right policy support. 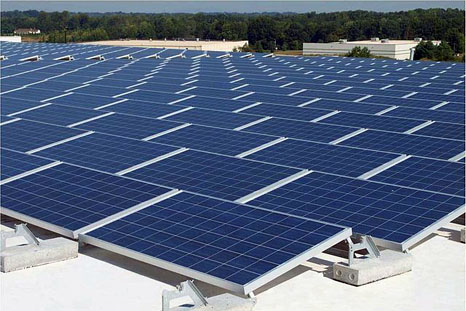 The main advantage with the Small and Medium sized Enterprise (SME) loans developed by RBS is that they factor in the future revenues that projects will receive when deciding if the applicants can afford the loan.

Currently applications only take into account the financial circumstances of applicants minus the revenues from their project, but Burrow explains they will now factor in cashflow from renewable energy subsidies.

No details on the community energy loans have been decided but this could be one possible ways to open up new finance for community projects.

“We’re talking to a couple of prominent community groups in the south west of England about what they want and how we can deliver that. We’ll work with them on a test case and see what we can do to fill that gap,” he said.

“Small schemes will be paramount, it safeguards the supply for the customer, reduces their bill and planning is easier for smaller developments. The opportunity is definitely in SME and smaller projects and that will grow year on year”.

RBS is 82% owned by the tax payer following a government bailout and has already developed a clean energy loan system for SMEs. Since its launch last year it has issued £32m to 127 smaller renewable energy projects, including £9m in partnership with Lombard Green Energy.

One such project is the the Ham Hydro scheme in West London, which hopes to generate enough power for 600 homes once constructed.

The project is six years in the making and relies almost entirely on local expertise and support to carry out planning, design, legal considerations and impact assessments.

“Community ownership of renewable energy sources is part of the coalition government’s agreement in the UK and features on the manifestos of both the Liberal Democrats and Conservatives,” he said. “However there are many barriers to achieving this. The biggest hurdles relate to planning and finance.

“Many projects are too large for high street lending but too small for most commercial banks. The prospect of RBS tailoring a finance offering for community renewables is a very positive step in the right direction and I hope other banks follow their lead.”

Innovative financing for clean energy is urgently needed. Figures from Bloomberg New Energy Finance at the end of 2012 suggest investment in wind, water, solar, biomass and nuclear power projects halved in the past three years.

Risk-averse lenders have been increasingly reluctant to back emerging low carbon technologies, due to weak carbon markets and a lack of policy certainty from central government.

The gradual decentralisation of the energy system in the UK from big power stations owned by one of six multinational companies has also created smaller energy projects developed by unfamiliar sources which banks are less willing to lend to.

Today a trade body for UK manufacturers, the EEF, called for more support to ensure companies get the right policy and financial support to protect its place in the green economy – which it said could be worth £880 billion by 2050.

Government has been taking steps to release capital. The UK’s Green Investment Bank was launched in 2012 with a pot £3bn, but its inability to borrow money and increase those funds leaves it operating well below its potential.

But while the UK waits to see if the government will adopt a recent amendment to the Energy Bill backing a decarbonisation target, others are exploring alternative forms of fishing for finance.

He says that in 10-15 years, the Transform model could unlock up to £150 billion for investment.

“Finance has become very short term,” he said. “We blend capital from governments, philanthropists, pension funds and retail investors so no one is on the hook for all the risk. It’s a commercial-social hybrid.

“It has been termed impact investment. It’s designed to make money and generate returns but with long term governance to fix market failures. We’re never going to address the big challenges with philanthropy and charity alone.”

RTCC VIDEO: Steve Podmore on why the current financial landscape does not suit low carbon investments