We have selected the highlights from Globe’s analysis of India’s  attempts to address climate change.

On the one side, the country has hundreds of millions of people without access to electricity and an economy demanding more energy to power growth.

These pressures mean that energy use, and emissions, are likely to grow substantially over the next few decades.

At the same time,  India is vulnerable to the impacts of climate change, in particular water stress, impacts on agriculture and susceptibility to weather-related disasters. 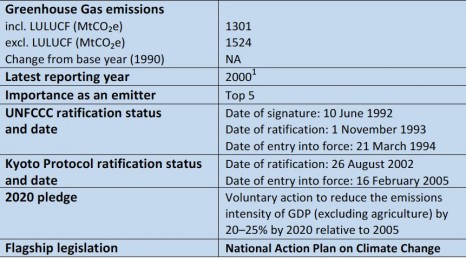 Despite having no obligation, as a developing country, to tackle emissions, India is coordinating comprehensive policies across the economy covering both mitigation of greenhouse gas emissions and adaptation.

India’s approach has so far been one of policy rather than comprehensive climate change legislation.

For example, the National Action Plan on Climate Change from 2008 outlines eight national ‘missions’ that run up to 2017.

-The National Solar Mission (setting a goal of increasing production of photovoltaic electricity to 1,000MW per year and to deploy at least 1,000MW of solar thermal power generation with an overall aim of making solar energy competitive with fossil-based energy)

The Plan makes clear that high growth requires growth in energy and that the government must take steps to reduce the energy intensity of production processes and to increase domestic energy sources.

One of India’s most interesting policies is a levy on coal, introduced in 2010, the funds from which go into a National Clean Energy Fund.

Finally, it is important to note that, beyond the scope of the GLOBE study, many States in India are preparing (and some have already launched) state-level Action Plans on Climate Change.

Political mechanics
The Indian parliament is a bicameral legislature composed of a Lower House (the Lok Sabha or House of the People), and an Upper House (the Rajya Sabha or Council of States).

The two houses have the same powers, but the Rajya Sabha’s power in the legislative process is subordinate to the Lok Sabha. All legislative proposals have to be brought in the form of Bills before Parliament.

Ambition
India is a non‐Annex I country under the Kyoto Protocol and thus has no binding target for emissions reduction.

However, India is an active participant in the Clean Development Mechanism (CDM) established by the Protocol. Indeed, it has more than 889 registered CDM projects as of 10 September 2012.

On 4 October 2012, the Indian government approved India’s 12th Five‐Year Plan for 2012–2017, drafted by the Planning Commission, which sets a target of 8.2% growth during that period.

The Plan makes clear that high growth requires supporting growth in energy and that the Indian government must take steps to reduce the energy intensity of production processes and also to increase domestic energy supplies as quickly as possible.

National Electricity Plan/2012 – The Plan’s 4th chapter deals with initiatives and measures for GHG mitigation, and aims to keep CO2 intensity declining while massively expanding rural access and increasing power generation to meet the demands of a rapidly growing economy.

Post‐Copenhagen domestic actions/2010 – On 10 May 2010, India released its Greenhouse Gas (GHG) Emissions Inventory for 2007, with the aim of enabling informed decision‐making and to ensure transparency. India has become the first “non‐Annex I” (i.e. developing) country to publish such updated numbers.

India has announced a levy, a clean energy cess, on coal, at the rate of Rs. 50 (US$1) per tonne, which will apply to both domestically produced and imported coal. This money will go into a National Clean Energy Fund that will be used for funding research, innovative projects in clean energy technologies and environmental remedial programmes. Expected earnings are US$500 million for the financial year 2010–2011.

Tariff Policy/2006 – Under the Electricity Act 2003 and the National Tariff Policy 2006, the central and the state electricity regulatory commissions must purchase a certain percentage of grid‐based power from renewable sources.

India has a wide range of legislation relating to climate and energy, in addition to those mentioned above. For a full list and more information visit the dedicated India page on the Globe website.