The European Parliament’s Environment Committee has voted in favour of plans to reform the bloc’s carbon market.

The proposal would withhold 900m credits from the EU Emissions Trading Scheme (ETS) in order to lift the price after it plunged to a record low of €2.81 earlier this year.

It was backed with a healthy majority with 38 in favour, 25 against and two abstentions. 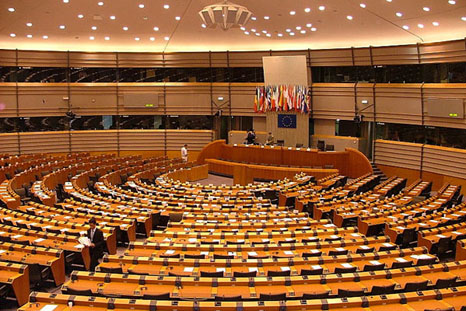 A vote by all MEPs at the EU Parliament’s could still be sidestepped if the committee decides to send the plans straight to the European Council. (Source: Wikimedia/Azla)

An industry committee voted against the planned reforms last month raising questions over the future of the ETS if it were to continue with the changes.

“Today’s vote is a promising first signal that policymakers recognise the current threats to the EU ETS and are prepared to salvage it, along with the EU’s international reputation for leadership on climate change,” said Damien Morris from the campaign group Sandbag.

The European Council, made up of the governments of the 27 member states must rule on the plans eventually.

It may or may not be put before the full complement of MEPs for approval before then being sent to the council for consideration.

The Environment Committee discussed sending the plans straight to the Council however, it was decided to postpone that decision to allow more talks with the industry committee.

“Backloading of emission allowances is only a temporary first step. Structural reforms of the carbon market need to make a reality of the EU’s 30% domestic carbon emission reduction commitments,” added Van den plas.

Campaign group Avaaz says it mobilised 25,000 German citizens to call their local MEPs, urging them to vote yes to save the scheme.

NGOs have campaigned for a more ambitious 30% target, which would boost the carbon market as well as sending a strong political signal on the EU’s climate change ambitions.

Johannes Teyssen, chief executive of E.ON, told Planet Ark the day before the vote that it was crucial to have a strong price on carbon.

“Nobody is investing any more. Returns are totally unavailable. There is no signal whether to invest in low carbon or high carbon. The message is that for the next 10-15 years, there is no reason to invest in low-carbon technology,” said Teyssen.

“Backloading is a necessary Step One, but it’s too little, too late unless it’s embedded in a more realistic reform,” he said.

“I personally believe a carbon price floor maybe combined with a carbon price ceiling could be a proper measure. It’s very difficult to imagine the current volume-based system alone.”