Changing the way rice is grown, from planting it in flooded paddy fields to drier soil cultivation, is dramatically increasing yields and reducing greenhouse gas emissions.

The results of trials in eleven countries show that yields increased by an average of 60%, although they varied sharply  between states, from an 11% increase to 220%.

A paper published in The Geographical Journal, the scientific publication of the Royal Geographical Society of London, says the System of Rice Intensification, or SRI, is having such success that 50 countries are now adopting it.

The method evolved in Madagascar over two decades but can now be applied in all rice-growing countries. Four studies in India, Indonesia, Kenya and Mali showed that production costs fell by 20-32%, and profit per hectare rose between 52% and 183%.

In China, which has adopted SRI on a large scale, yields increased, but – just as important for a country short of water – 22.6% less irrigation was needed. 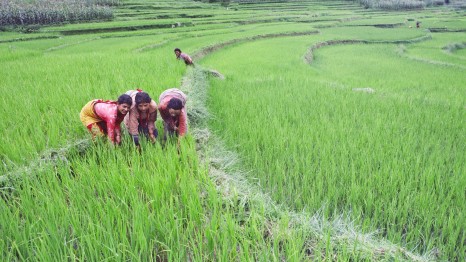 Fluctuations in rice production because of changes in rainfall is common

SRI involves growing rice in aerated soil instead of flooded paddies. Single young seedlings are planted with regular wide spacing, and soils are kept moist but not wet. Nutrients are placed in the soil next to the plant rather than spread randomly.

The method reduces the costs of land preparation, seed, fertilizer and water use, and cuts methane emissions, while achieving the increased crop yields. Rice grown by the new method has bigger roots, and the larger plant produces more and heavier grains.

The environmental benefits, apart from the reduction in methane emissions from the flooded paddies, include a lower need for tractor power and the labour required before the crop is planted.

In areas where arsenic in water is a problem – like Bangladesh – this new method reduces arsenic contamination in crops and soil. There are also health benefits to farmers and labourers working in dry fields rather than flooded ones. SRI also reduces the mosquito population and therefore malaria.

It is proving a success in all 50 countries which have adopted it across Asia, Africa and Central America. Despite this, one obstacle to exploiting this potentially huge boost to yields is getting the message to farmers, say the researchers, Amir Kassam, convener of the Land Husbandry Group at the UK Tropical Agriculture Association and Hugh Brammer, former United Nations agricultural development adviser to Bangladesh.

Educating the poor farmers who will benefit most is an uphill task because in many African and Asian countries they have little or no institutional backup, or sometimes because governments have collapsed altogether.

The researchers suggest that modern communication devices – mobile ‘phones, computers and television sets – could be used to educate the farmers. Non-governmental organisations “with their closer contacts with rural people than most government officials” could play a valuable role both in testing ideas and obtaining feedback.

SRI and another longer-established method of cultivation, called in the US no-till agriculture, where land is not ploughed but seeds are drilled direct into the topsoil, are the best hope of increasing food production.

No-till agriculture, or conservation agriculture (CA) as it is called elsewhere, works well on poor soils where erosion is a problem and mulch is applied to keep moisture and nutrition in the soil.

The paper concludes: “In the coming decades CA and SRI appear to offer the best hope of increasing food production rapidly, at low cost and without adverse environmental consequences in developing countries where human populations are increasing most rapidly.”