Russia and China blocked efforts last Friday to have climate change recognised as an international security threat by the UN Security Council (UNSC).

The council met in New York to discuss the potential effects of global warming, but according to Bloomberg the two permanent members objected to it being a ‘formal session’.

Despite the participation of UN Secretary-General Ban Ki-moon this meant the session – planned by Pakistan and the United Kingdom – had few political implications.

China, Russia, India and more than 100 developing countries oppose climate becoming a UNSC issue as the council does not operate under the principles of Common But Differentiated Responsibility, which underpins the UN climate talks.

They are concerned that securitizing the issue would place a greater burden on poorer nations with large greenhouse gas emissions to take action. 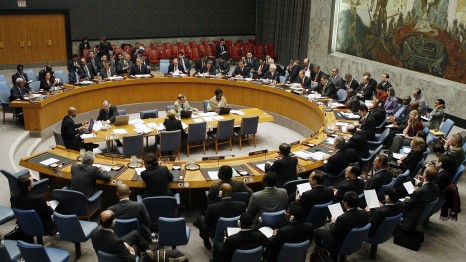 The Security Council is mandated to take primary responsibility for the maintenance of international peace and security (Pic: UN Photos)

Small island states vulnerable to sea level rises have pushed for climate to be discussed at this level for over two decades.

Marshall Islands representative Tony deBrum expressed frustration with Russia and China’s stance, explaining that 35 years on from gaining independence from the USA the very existence of his country is now in question.

“Our roads are inundated every 14 days,” he said. “We have to ration water three times a week. People have emergency kits for water. We can no longer use well water because it’s inundated with salt.”

The meeting – the third in UNSC history – was convened by council President Pakistan and permanent member the United Kingdom, which despite domestic criticism over its low carbon strategy appears to be embarking on a new initiative to inject momentum into global efforts to cut emissions.

The UK’s new climate envoy Rear Admiral Neil Morisetti is pushing for climate change to be framed as a global security concern.

“The UK believes that the impacts of a changing climate pose a significant and emerging threat to a country’s national security and prosperity,” a Foreign Office spokesman told RTCC.

A 2009 report commissioned by the council identified climate change as a ‘threat multiplier’, stressing it would hit food supply lines and affect the territorial integrity of island states.

And in 2011 it discussed whether ‘green helmet’ climate peacekeepers could be required to prevent conflicts caused by resource scarcity.

Addressing the session, leading German scientist Joachim Schellnhuber explained that rises in global temperatures were likely to have catastrophic consequences.

“With unabated greenhouse-gas emissions, humankind would venture into an uncertain future that is much hotter than ever before in its history – so from a scientist’s perspective, climate change is a global risk multiplier,” he said.

In a statement Oxfam International’s Tim Gore urged the UNSC to debate the issue further, warning the global food system was already under severe stress as a result of droughts across the US, Africa and Asia.

“Droughts or floods can wipe out entire harvests, as we have seen in recent years in Pakistan, in the Horn of Africa and across the Sahel,” he said.

“And when extreme weather hits major world food producers – like last year’s droughts in the US and Russia – world food prices rocket. This presents a major risk to net food importing countries, such as Yemen, which ships in 90% of its wheat.

“The food riots and social unrest seen in the wake of the 2008 food price spikes were not a one-off phenomenon, but a sign of the risks we face through our failure to feed a warming world.”