Germany could block plans to save the EU carbon market if it abstains from a crucial vote on reforms expected to take place shortly.

The price of carbon credits in the EU Emissions Trading System (ETS) has tumbled to a record low as a result of an oversupply of credits.

A plan to withhold 900m emission allowances from the next phase of trading – called backloading – has been placed before the Union’s member states.

But a dispute between the finance and environmental ministries could see Angela Merkel’s government, which faces an election later in the year, opt instead to abstain IHS senior policy analyst Kash Burchett told RTCC.

“Germany is in a tug of war between the environment and industry ministries and they could abstain from the vote,” Burchett said.

“That means it won’t be difficult for Poland to block the amendment. Backloading was presented as a silver bullet until they revealed the numbers involved. 900m is not laughable, but it is unambitious.

“Holding back 1.2bn credits would make people take notice and 1.4bn would be the bazooka option.” 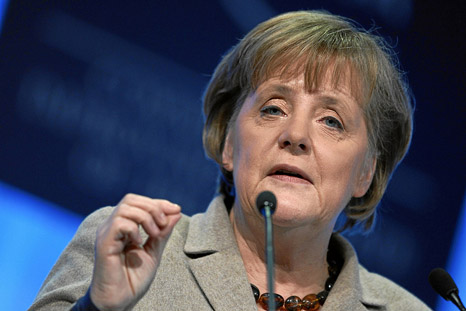 German Chancellor Angela Merkel faces a tricky election in September and a healthy carbon price could act for and against the country’s interests (Source: Flickr/WEF)

The decision will go to the European Parliament’s Environment Committee on February the 19th where it is expected to be passed.

But the real test will come when it is eventually put to the 27 member governments that make up the European Council.

The Council uses qualified majority voting whereby nations have weighted influence according to their size. Just under 74% of the votes are needed to pass a proposal.

A German abstention would lower the number of votes needed to block the plans with Poland requiring as few as three of its close allies, Romania, Czech Republic and Hungary, to join it in voting down the reforms.

Predicting which way Germany will vote is difficult. The decision has been delayed while a personal political spat plays out in Berlin.

German utility firms, whose emissions are capped under the ETS, could paint Merkel’s support for stronger trading system as directly impacting on domestic bills.

“Germany was supposed to have chosen its position by now but the issue has turned into a personal political spat between Peter Altmaier and Economy Minister Philipp Rösler,” Rob Ellsworth, senor policy analyst at Sandbag told RTCC.

“The motivation to abstain and effectively disable the ETS for a considerable period of time is questionable. I’d be surprised if they abstain, I don’t think the German electorate would be too impressed when they realise Germany had essentially killed EU climate policy.

“It’s clear the Economic Ministry is trying block this while the other ministries are in favour, but you have to ask if when push came to shove, would Germany really abstain. A lot of their investments for their energy transition are link to carbon revenues and that is a diminishing pot at the moment.”

There could be pressure from the industrial lobby for Germany to block backloading. Ten German companies have profited from in the scheme to the tune of €1.2bn according to a report by the NGO Sandbag, which monitors the carbon markets closely.

The European Parliament Industry Committee has already voted against the proposal, a symbolic but not binding result.

Climate action Commissioner Connie Hedegaard has also stressed the extent that some big industrial companies have been able to benefit from the scheme, picking out the ArcelorMittal steel conglomerate as one example.

She calls the need for backloading “a no brainer” and the first necessary step of the EU’s passage to more ambitious climate change targets.

@adamvaughan_uk @rtcc_john Good Q. Backloading ETS is a no brainer – that MS and EP must support before next steps #worldlulike

UK Minister for Energy and Climate Change Ed Davey revealed the extent for the behind the scenes lobbying at  European Council during a hearing in Westminster yesterday.

“It’s not clear that there is qualified majority support for backloading,” said Davey referring to the weighted voting system used by the European Council.

“I’ve been talking to a number of like-minded members of the Council to see if we can drive an ambitious position,” said Davey adding that member’s should not be considered to be immovable in their opinions and that there was always room for persuasion.

“I’ll strain every sinew to get an ambitious conclusion. The UK is the only government that has a position, as far as I am aware, on where they want to go with this,” said Davey.

Poland certainly has a strong position. With a reliance on coal for electricity and a relatively carbon intensive economy compared to the other EU member states, Poland claims the ETS impacts it more punitively.

It’s straight talking Environment Minister Marcin Korolec has warned a longer term fix than backloading is required and suggested that it loses sight of the ETS’ primary goal of emission reductions.

Together with other central European countries in similar economic positions, it has previously blocked climate and energy policies that it felt would harm it.

The EU is under pressure from NGOs to extend its current emission reduction targets from 20% to 30%.

Increasing this goal would stimulate demand for carbon credits. Failure among member states to agree on short term plans to prop up the ETS do not bode well for finding support on a more ambitious long-term policies.