The world has missed the chance to keep greenhouse gas emissions below the level needed to prevent the temperature climbing above 2°C, according to the British scientist who used to chair the IPCC, the Intergovernmental Panel on Climate Change.

The scientist, Professor Sir Robert Watson, chaired the Panel from 1997 until 2002, when he was ousted after US pressure for his removal.

Professor Watson says there is a 50-50 chance of preventing global average temperatures rising more than 3°C above their level at the start of the industrial age, but a 5°C rise is possible.  That would mean the Earth warming more than it has since the end of the last Ice Age.

He was speaking at a symposium, Preventing global non-communicable diseases through low-carbon development, held at the London School of Hygiene & Tropical Medicine (LSHTM).

He said: “All the promises in the world, which we’re not likely to realise anyway, will not give us a world with only a 2°C rise. All the evidence, in my opinion, suggests we’re on our way to a 3°C to 5°C world.

“Some people are suggesting that we try to geo-engineer our way out of the problem, intervening in the climate system to moderate warming.

“I’m very, very nervous about that. It shows a level of arrogance that we know how to manage our environment. It certainly needs a lot of research.” 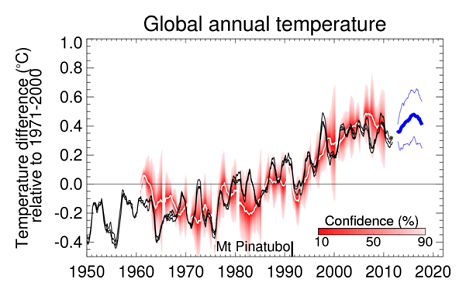 Professor Watson concluded: “There are cost-effective and equitable solutions to address climate change, but political will and moral leadership is needed, and the changes in policies, practices and technologies required are substantial and not currently under way.”

Professor Watson told the Climate News Network: “We’re going to have more people in the world and they’ll be wealthier, so energy demand is bound to rise.

“We look like having huge quantities of gas from shale. That can be a useful transitional tool: it emits half the carbon you get from coal. But it’s not a long-term solution, unless you can use it with carbon capture and storage, CCS. I’m optimistic that CCS can work, but it’s got to be shown to work, and what costs and energy penalties it will entail.

“We now know we can’t rule out a possible 5°C temperature rise, and we need to start preparing for it.

“When I was chairing the IPCC we were all very optimistic that we’d have a global agreement to limit emissions, though we knew it would be difficult. But we were hopeful that emissions would not go up at the tremendous rate they are rising now.”

More species would be facing extinction (10% of species are thought to be at risk for every 1°C of warming), there would be more (and more intense) extreme weather, and a growing risk of abrupt and major irreversible changes in the climate system.

Professor Watson was voted out as the IPCC’s chair in 2002.

The weekly New Scientist reported that the year before, shortly after the inauguration as US president of George W Bush, an ExxonMobil executive wrote to the White House asking: “Can Watson be replaced now at the request of the US?”

He is now science director of the Tyndall Centre for Climate Change Research at the University of East Anglia, UK, and chief scientific adviser to the UK Government’s Department of Environment, Food and Rural Affairs.

“We need to look not just at population, but at consumption in the developed countries. A lot of vested interests don’t want to go down that road. We can change by paying for externalities, like the adverse effects of air pollution.

“We can address the inequalities which are evident in areas like heart disease rates and diet. And we need to influence the UN’s new sustainable development goals to include both health and environment indicators.”

Sir Andy told the symposium: “The climate change deniers have been given far too much airtime.

“The US authors Naomi Oreskes and Erik M Conway explain in their book Merchants of Doubt the striking overlap in the spreading of disinformation between some of them and the members of the tobacco lobby who a few years ago were denying any link with smoking.”