Senate to be presented with US carbon tax plans

Washington’s resolve to act on climate change will be tested tomorrow when the Senate is presented with new plans for a national carbon tax.

Less than 48 hours after President Obama began adding meat to the bones of his renewed enthusiasm to tackle the issue, a fresh proposal to establish a levy linked to greenhouse gas emissions will be unveiled

Democratic Senator Barbara Boxer and Independent Bernie Sanders have arranged a press conference on Thursday to announce what they call “comprehensive legislation on climate change”.

“Under the legislation, a fee on carbon pollution emissions would fund historic investments in energy efficiency and sustainable energy technologies such as wind, solar, geothermal and biomass,” according to a statement on Senator Sanders’ website. “The proposal also would provide rebates to consumers to offset any efforts by oil, coal or gas companies to raise prices.” 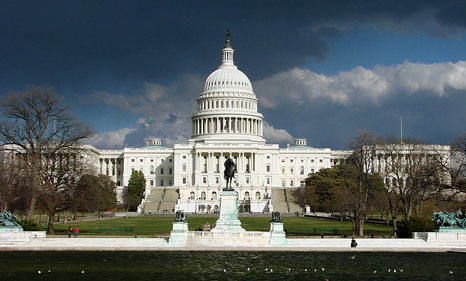 Climate policies have struggled to pass through both Houses in Washington DC (Source: Flickr/AllieCaulfield)

The announcement follows a series of indications in Washington that climate change is becoming a pressing issue.

President Obama raised it in his election victory and inauguration speeches before adding more detail in last night’s State of the Union Address.

The appointment of climate hawk John Kerry as Secretary of State and the establishment of a Climate Caucus has added to the expectation that Obama’s second term will see him turn soundbites into action.

Senator Boxer has been a vocal backer of climate action in the US and has been behind a number of efforts to kickstart national policies.

Last month she spoke of the possibility of replacing the 18.4 cents a gallon tax on gasoline with a carbon tax, that could be reinvested in renewable energy and efficiency measures.

The unpopular gasoline tax is paid at the pump by consumers but has dwindling returns as Obama’s vehicle efficiency policies bite.

Passing this cost to oil companies would make it easier to get backing from the public and fits with suggestions in President Obama’s State of the Union address.

“I propose we use some of our oil and gas revenues to fund an Energy Security Trust that will drive new research and technology to shift our cars and trucks off oil for good,” said Obama. “I urge this Congress to get together, pursue a bipartisan, market-based solution to climate change, like the one John McCain and Joe Lieberman worked on together a few years ago. But if Congress won’t act soon to protect future generations, I will,” said Obama.

In 2010 Senator Boxer described a “reduce and refund” policy to divert the costs of renewable energy away from consumers.

“Reduce the pollution, we say to the polluters, and refund the money to the people so that as we shift to clean energy, it won’t cost [consumers] more. We tried it [climate legislation] twice and the last time the Republicans boycotted my committee,” she told a meeting of the Commonwealth Club.

“Why should we not step up to the plate? We need to do everything we can. It will create jobs here, reduce pollution and help our budget, It’s win, win, win,” she said.

The US currently has two regional carbon trading schemes applicable to electricity generators in California and a coalition of nine states on the Eastern Seaboard.

Terry Townshend of GLOBE International, says efforts to pass ambitious, national climate policies have been difficult to push through both the Senate and the House of Representatives.

“There were a number of attempts to pass a comprehensive climate change bill in the 111th Congress – the most significant of which was the American Clean Energy and Security Bill (ACES) referred to as the “Waxman‐Markey Bill”, which passed the House of Representatives in June 2009 but was rejected by the Senate – all attempts have failed,” he says.

A number of events, most notably Hurricane Sandy have driven up the appetite for climate action from the US public making it politically harder to reject climate policies out of hand.