Morgan Freeman, Edward Norton and Alec Baldwin have joined a number of environmental NGOs in a call for President Obama to ramp-up climate change action and shift the US to low carbon energy.

In an advertisement printed in newspapers in and around Washington DC, the coalition called on Obama to “lead an effort on the scale and with the urgency we need to phase out fossil fuels and lead America, and the world, in a clean energy revolution”.

The President will make his State of the Union Address today and is widely expected to announce a series of measures to boost the country’s emission reductions. 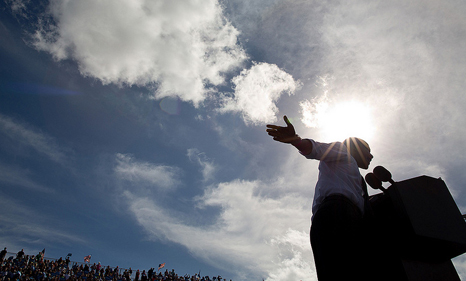 Obama is hotly tipped to lay out some new climate change policies during the State of the Union address. (Source: Flickr/White House)

Climate change featured prominently in the more philosophically-focused inauguration speech but the State of the Union is a platform to lay out specific policies, making it the first test of Obama’s sincerity on climate action.

Last week the World Resources Institute (WRI) published a collection of policy options readily available to the President without the need to win over a hostile congress or to wait for technological advances.

Limiting emissions from existing power plants and tackling the potent global warming family of HFC gases were near the top of the list.

It is expected to fall short of this objective without the establishment of new policies to lower greenhouse gas emissions.