Comment: This is Obama’s best chance to cement climate legacy

President Obama’s Inaugural Address last month surprised many in Washington with its focus on climate change.

It set in motion a flurry of speculation as to how his Administration might transition from ambitious talk to meaningful action during his second term.

The upcoming State of the Union address could be just the opportunity for the President to elaborate on how his Administration might take action.

But what options does the President have at his disposal to reduce GHG emissions at a time where a deeply divided Congress has stalled on the issue?

In January, I wrote a letter to the President, imploring him not to allow Congressional intransigence to breed a policy of inaction.

The United States’ climate problems are best addressed through a market-based, cap-and-trade program that sets a price on carbon. 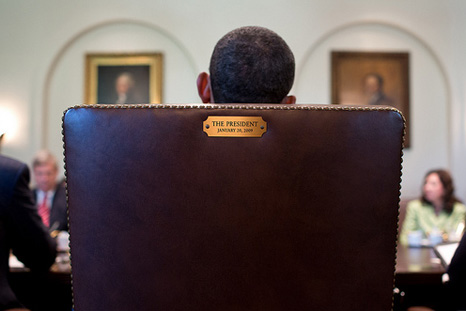 President Obama has the tools at his disposal to make deep emission cuts. (Source: Flickr/White house)

A well-designed cap-and-trade program provides flexibility and cost-savings for an economy still rebounding from recession – particularly in comparison to inflexible command-and-control regulation.

While it does not seem realistic – or advisable – to attempt another “economy-wide” GHG regulation, under the leadership of the President, Congress could craft more narrowly focused legislation that utilizes cap-and-trade.

A new route to US carbon trading

For inspiration, look no further than the numerous cap-and-trade programs emerging around the world in Australia, New Zealand, the European Union, South Korea, and – yes – China.

Even at home, California has taken the initiative to reduce its emissions by launching a cap-and-trade program this year. Don’t forget the nine Northeast and Atlantic states participating in the Regional Greenhouse Gas Initiative (RGGI), who just announced a strengthening of their electric sector cap-and-trade program.

Indeed, nations around the world are taking actions to reduce emissions, and their policy of choice is overwhelmingly a market-based mechanism.

In the absence of congressional legislation, President Obama still has options. He can choose to use the Environmental Protection Agency (EPA) to enforce regulations on GHG emissions sources. In his first term, the EPA worked collaboratively with the auto industry to develop vehicle emission standards that are aggressive yet achievable.

However, the more significant action would be to regulate emissions from existing power plants under Section 111(d) of the Clean Air Act.

While EPA regulations are admittedly second best to congressional legislation, the President could follow his auto industry model and collaborate with industry to develop very meaningful reductions from the power sector.

Such an effort, coupled with the transportation reductions he has already achieved, would end the President’s tenure having regulated almost 65% of the country’s emissions.

How regulation is designed under the Clean Air Act will be extremely important to the President’s legacy.

It should be crafted in such a way as to enable states that have already set up climate change programs (i.e. RGGI states and California), or states that would like to join already existing state-level programs, to be able to avoid federal pre-emption so long as their programs are shown to achieve as effective (or better) results.

It should also provide flexible compliance pathways wherever possible to encourage emissions reductions in an efficient and cost-effective manner.

While Congressional action on climate mitigation may remain stalled, it will have a responsibility to address adaptation measures – given the greater risks to communities from extreme weather events.

As Congress begins to address the growing need for infrastructure investment across the country (highways, electrical grid, water infrastructure, disaster relief, etc.) it will be integral that these investments take climate change into consideration.

IN FOCUS: US climate change legislation

Business is already responding to climate risks by investing in adaptation measures. Lawmakers must follow suit to ensure public investment can withstand the increases in extreme events driven by our changing climate.

The President genuinely appears eager to address climate change. Whether Congress obliges or not, he has options at his disposal to achieve results.

If he does so in an effective manner, taking private sector concerns into consideration, the President has the opportunity to make good on his Inauguration Speech.

Outlining some of his Administration’s plans to do so in his next State of the Union would be a good start.

Dirk Forrister is the President and CEO of the International Emissions Trading Association. IETA has been the leading voice of the business community on the subject of carbon markets since 2000.

IETA’s 150 member companies include some of the world’s leading corporations, including global leaders in oil, electricity, cement, aluminum, chemical, paper, and other industrial sectors; as well as leading firms in the data verification and certification, brokering and trading, legal, finance, and consulting industries.