Climate science is “irrefutable” and “screams out from decade upon decade of research” UK Energy and Climate Secretary Ed Davey will tell an audience at the Royal Society later today.

And in a direct attack on climate sceptics who believe man made global warming is at best overblown or at worst a hoax, Davey will argue they are risking their children’s futures by slowing efforts to cut emissions.

“You know, when I am confronted by some of the most dogmatic and blinkered people who deny that climate change is happening, I am reminded of the sentiment of the famous USA Today cartoon,” he will say.

“If we really are wrong about climate change, we will have created a better world for nothing. 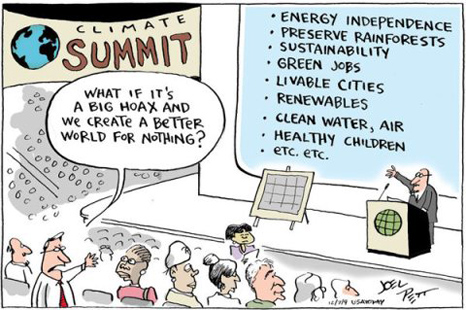 “In reality, those who deny climate change and demand a halt to emissions reduction and mitigation work, want us to take a huge gamble with the future of every human being on the planet, every future human being, our children and grandchildren, and every other living species.”

Davey will be speaking at the AVOID symposium, which will see the UK’s leading scientists discussing the possible impacts that climate change will have on the world.

Earlier this year AVOID – a collaboration of climate experts – published research showing that to achieve a 50% chance of limiting warming to 2°C, global emissions need to peak in the next few years and be followed by rapid long-term reductions.

The most stringent emissions scenario in the study keeps global temperature rise below 2 degrees C and has global greenhouse gas emissions which peak in 2016 and then reduce at 5% per year to 2050.

To achieve this Davey is expected to call for “green, clean energy and transport” as well as investment in new energy efficient technologies.

His comments come a day after UN Secretary General Ban Ki Moon expressed his frustration at the lack of climate action from world leaders in the face of what he called a “gathering threat”.

“Too many leaders seem content to keep climate change at arm’s length, and in its policy silo. Too few grasp the need to bring the threat to the centre of global security, economic and financial managementm,” Ban said.

“It is time to move beyond spending enormous sums addressing the damage, and to make the investments that will repay themselves many times over,” he said, noting the potential of the renewable industry to do that and to spur the world economy, as proposed in his Sustainable Energy for All initiative.

“A global climate change agreement would give us the engine we need to advance us decisively on this path,” he stressed, welcoming US President Barack Obama’s “new resolve” to address climate change and give it high political priority.