WWF: EU budget a bad deal for the climate

The draft EU budget is damaging to the environment and represents a missed opportunity to reform key policies, according to WWF.

A €960bn ceiling was agreed for the period 2014-2020 along with a breakdown of how this would be divided between the main channels of spending. More detail will be negotiated later.

International aid received a disproportionately large cut while investment in connecting Europe’s energy infrastructure, a move that would allow better pooling of renewable resources, was cut from €12bn to €5bn.

“This is not a good deal for the climate. There are some interesting elements but the complete failure on Common Agriculture Policy (CAP) is such that it will be bad for the environment and climate in general,” said Sebastien Godinot, an economist with WWF’s European Policy Office.

“We’re very much opposed to the council adopting this proposal. It would be a major missed opportunity,” he told RTCC.

The European Parliament will vote by secret ballot on whether to approve the draft budget to avoid coercion from governments back in national capitals. 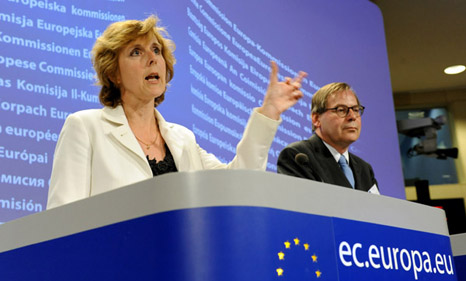 EU Commissioner for climate action Connie Hedegaard stressed the importance of the assignment of 20% of all funding to climate action.

While this mainstreaming of climate considerations across all spending is to be welcomed, NGOs question whether it will be put into practice at a project level, a challenge acknowledged by Hedegaard herself.

“It is now up to all involved parties – including the European Parliament – to ensure that the overall ambition is duly reflected with clear targets and transparent measuring methods in all the relevant policies and programmes, not least the CAP,” she said in a statement.

EU agreement: 20% of their total budget to Climate action.Does that include promises made in Copenhague to developing countries? #MFF #euco

The CAP negotiations proved to be a sticking point throughout the talks.

Efforts to incorporate rural development and a greening of the CAP’s subsidies have been compromised by a clause that allows this funding to be rerouted into the main pot of direct finance for farmers.

“We have missed a big opportunity to reform the CAP and it will make it almost impossible to reach the 20% Multi-annual Financial Framework (MFF) climate spending commitment. And we will need in any case a stringent methodology from the European Commission to make this climate commitment concrete,” added Godinot.

Major NGOs including Oxfam have questioned several cuts particularly on development assistance and conservation where they say cuts have been disproportionately large for relatively small savings. (See the infographic below)

“In addition to development funding, the tiny LIFE programme for the environment has been severely cut, despite clear European commitments to deliver on poverty eradication, climate finance and biodiversity protection,” said Godinot.

Markus Trilling, CEE Bankwatch Network/Friends of the Earth Europe expressed disappointment with the cuts and called for individual governments to make sure they spend wisely.

“There is a lot still to play for. Member states need to put quality at the heart of their spending plans for 2014–2020, to open the door for investments into energy savings and renewables, green innovation, resource efficiency and sustainable transport,” said Trilling.

“Quality spending at the national level can bring environmental and economic benefits and help bring Europe out of crisis,” he said.