Business leaders are worryingly unfazed by the potential of 4°C of warming, the International Energy Agency’s (IEA) chief economist Fatih Birol has said.

Speaking at an event in London last night, Birol said the danger of sleepwalking into 4°C was worthy of great concern.

Temperature increases above 2°C are likely to trigger dangerous warming according to climate scientists.

“4°C is better than 6°C but it is still horrible. The implications of that are a drastic increase in extreme weather events, sea level rise and temperature increases and acidification of the oceans,” said Birol.

“Many people to my surprise, during the climate change discussions in Davos, people who are very much engaged in the climate science debate from the energy and business sector, don’t seem uncomfortable with the 4°C trajectory. This is very bad,” he said. 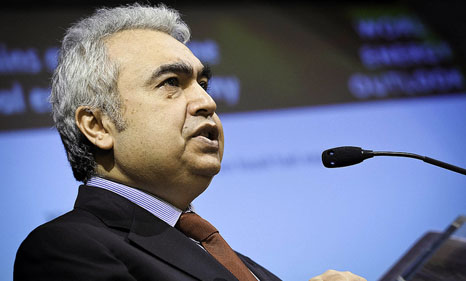 Fatih Birol says he is concerned by how comfortable some people are with the potential of 4°C of warming. (Source: Flickr/FriendsOfEurope)

Birol chaired a session at the WEF meeting in Davos on global energy with Majid Jafar, the managing director of Dana Gas in the UAE, Sam Laidlaw, CEO of the UK’s Centrica utility and Robert D. Hormats, US Undersecretary of State for Economic, Energy and Agricultural Affairs.

“It is a very worrying trend that people are thinking ‘we can’t expect to limit it to 2°C, but at least four is not as bad as six, we can live with that’,” added Birol.

The World Bank released a report on the dangers of a 4°C world prior to the UN climate change negotiations in Doha last year while consultancy firm PwC predicted the planet is on track for a 6°C rise.

Asked for his thoughts on nuclear energy in the wake of setbacks for new nuclear power stations in the UK, Birol said there was no getting away from a role for nuclear power.

“If we look at the 2°C trajectory it will never happen with only gas replacing coal and energy efficiency. We need zero carbon technologies for electricity generation, renewables, carbon capture and storage (CCS) and nuclear, which I believe will have a key role,” he said.

Birol added the IEA has no sympathy toward any one technology based on anything other than cost and benefit.

“You may or may not love nuclear, we are not exactly in love with it but it will have to play a role in addressing climate change.”

He also had strong words on fossil fuel subsidies calling them “public enemy number one” for a sustainable energy transition.

“In Europe, as a disincentive to use carbon there is a price per ton of less than $10. In many countries, where the bulk of these subsidies come from, Middle East, Asia, some parts of Latin America, these subsidies translate to a $110 incentive to consume a ton of carbon. You can’t compete with that,” he said.

The IEA will publish a new report on June 10 this year titled “Redrawing the Energy-Climate Map”.