The US is committed to reduce emissions by 17% by 2020 compared to where they were in 2005 but a new report claims current policies won’t be enough to get across the line.

The World Resources Institute (WRI) predicts that CO2 emissions from energy will only be 10% behind 2005 levels. Non-energy CO2 emissions and non-CO2 greenhouse gases such as methane and HFCs will increase by 18% compared to 2005.

US CO2 emissions have fallen in recent years, largely due it phasing out coal power stations in favour of natural gas. The total basket of greenhouse gases, particularly methane, are not keeping pace leaving US efforts behind schedule.

The report concludes that a series of policy changes at the national and state level could help the US to not just meet but exceed its 17% target (see the interactive infographic below).

The good news is that President Obama has taken the first big step by admitting the country has a problem, WRI has suggested some of the solutions that could get the US back on track.

A combination of state and Federal level policy including stiffer renewable energy targets and a continuation of existing policies to limit emissions from fossil fuel power stations.

Below we’ve outlined an eight point plan drawn from the WRI report. 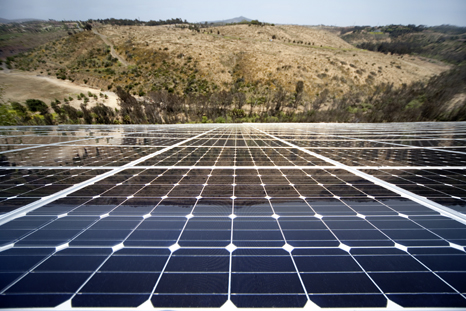 The US has a long way to go to hit its 17% emission reduction target according to the World Resources Institute (Source: SolarWorld)

This process has already begun with the Environment Protection Agency (EPA) classifying carbon dioxide as a pollutant enabling it the enforce efficiency standards on the dirtiest coal power stations. Last month the total output of high emitting power stations either shut down or scheduled to do so passed the 50GW mark. Coal provided roughly 320GW of the USA’s 1050GW of installed power stations.

Continuing this push is by far the largest single contribution to further reducing US emissions.

Leaks of methane, a more potent warming agent than carbon dioxide though with a shorter lifespan, make up another significant chunk of potential emission reduction.

Such leaks from coal mines and gas drilling sites are on the rise as a result of the shale gas boom in the US. Tighter regulation throughout the drilling, transportation and storage process could deliver more than 10% of the necessary emissions reductions to get the US toward its 17% 2020 target.

HFCs, used as a refrigerant and in a number of industrial processes, can be several hundred times more potent than CO2 in terms of their warming potential. The EPA estimates that HFC emissions will more than double by 2035.

With many HFC replacements also having a high global warming potential (GWP), a new EPA scheme to restrict alternative to those with low GWPs only, could make a dent in their growth.

With the big car makers in Detroit on board with stringent efficiency standards to squeeze more miles out of a gallon of gas, Obama’s other flagship efficiency drive is making its mark.

Alternative fuels and the rollout of electric vehicles, especially in California, are also helping to reduce emissions.

Reducing the total vehicle mileage rates by getting people out of their cars and onto public transport can add to the yield of saved carbon from switching fuels.

Residential energy efficiency is largely in the hands of state legislators.

Promoting Combined Heat and Power (CHP) at a state level could lead to the installatioin of an additional 45GW of CHP by 2025.

WRI propose an increase of 0.5% a year from 2015 for those states without a target and a 1% annual increase for those with an RPS in place.

This might be near impossible to gain uniform support for in Washington but many states have already signed up to cap and trade systems.

WRI’s most optimistic route to emissions over and above the 17% target assumes that 50% of the nation’s emissions are covered by the carbon trading from the existing Californian platform and the Regional Greenhouse Gas Initiative (RGGI) on the East coast.