Environment Ministers from states bordering the Arctic have called for urgent action on short lived climate pollutants (SLCP) such as methane, HFCs and black carbon soot.

Ministers and senior officials from the USA, Russia, Canada, Norway and other Arctic countries pressed for efforts to reduce these potent global warming emissions in order to maintain the balance of the Arctic ecosystem, following a two-day summit in Sweden.

“Ministers stressed the need for urgent action to reduce SLCP emissions to contribute to Arctic climate change mitigation and to the preservation of the unique culture and ecosystems of the Arctic which are under threat from rapid climate changes,” read the statement issued at the conclusion of the meeting.

Black carbon, which includes soot and other carbon particles can antagonise warming in the Arctic by covering reflective ice and absorbing additional heat into the ice speeding up its melt. 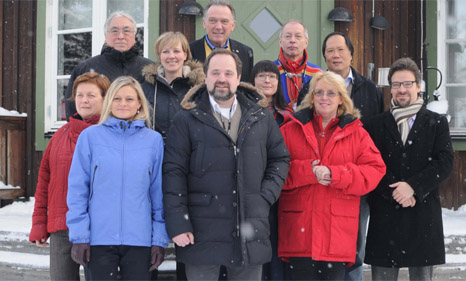 “Ministers acknowledged the worrying scientific findings identifying large-scale tipping points in the Arctic, such as collapse of the Arctic summer sea-ice, accelerating melting of the Greenland ice sheet, releases of methane from melting permafrost, all of which, if crossed, may have substantial global effects,” the Ministers said.

Arctic sea ice levels, which fluctuate with the seasons, shrank to a record low this summer while surface melting of the Greenland ice sheet was under way across 97% of its surface.

UNEP has predicted that 40% of global greenhouse gas emissions could come from methane released by thawing permafrost in the Arctic and Tundra regions by 2200.

“Reducing black carbon and the other short-lived climate pollutants can cut the rate of Arctic warming by two-thirds. We need a crash course that starts today with black carbon, which is responsible for half of the Arctic warming,” said Durwood Zaelke, founder and president of the Institute for Governance & Sustainable Development (IGSD).

HFCs can have a warming effect 1,000 times greater than that of CO2 but do not damage the ozone layer. They are commonly used as replacement for CFCs that the Montreal Protocol has all but eradicated. There are now calls for a similar approach to stave of the growth in the use of HFCs.

“We need to reduce HFCs under the Montreal Protocol, as this is the single biggest, fastest, and cheapest climate mitigation available to the world today, avoiding the equivalent of 100 billion tonnes of carbon dioxide,” added Zaelke.

The EU has recently published its own proposals to tackle HFCs that include a gradual decrease in use. It is hoped that this could help to clear the path for more aggressive action on HFCs internationally through the Montreal Protocol.

Environmentalists are sometimes reluctant to champion non-CO2 reductions, wary of the distraction from the necessary longer term effort required to take meaningful action on climate change.

Norway, Russia, Canada and the US, all part of the Arctic Environment Secretariat are also all major fossil fuel producers.

All four are also expressing an interest in exploring for oil and gas inside the Arctic. A spill response plan developed by the Arctic Council was dismissed by Greenpeace as “vague” earlier this week.