Nick Clegg: UK government legally bound to be greenest ever

The UK coalition government is legally bound to be the country’s “greenest ever”, according to Deputy PM Nick Clegg.

The Conservatives and Clegg’s Liberal Democrats have been painted as being at loggerheads on several climate and energy issues since the election.

Prime Minister David Cameron famously “hugged a husky” in the Arctic to bolster his green credentials in the election build up and a promise to form the “greenest government ever” has hung over its head since.

Asked during an evidence session with the Liaision Committee whether the Government would live up to the claim Clegg said “we have no choice” and said he would ensure that existing promises were not watered down in the future. 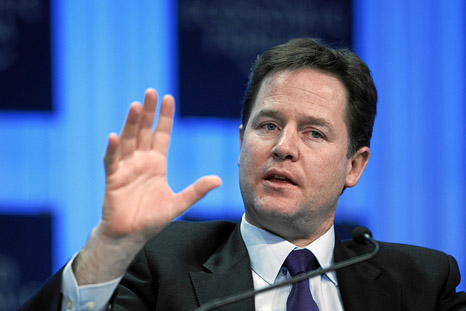 Deputy PM Nick Clegg says the Climate Change Act binds the government to its claim to be the greenest ever (Source: Flickr/WEF)

The 2008 Climate Change Act, which established the framework for the country’s landmark carbon budget will ensure that the government can’t slide back on its promises.

When asked about the perception that the two parties in power were warring on green issues he admitted there was some conflict despite tip-toeing carefully through his answer.

“There is a view represented in government that seems to suggest we can’t afford to delay recovery by setting new decarbonisation targets for the economy…we need £110bn of new investment for electricity infrastructure,” said Clegg.

“It’s a massive opportunity to create hundreds of thousands of jobs, boost university research and rejuvenate the economy. It’s a fundamental debate about whether green economy is an impediment to or an ingredient of economic growth. I know the Prime Minister agrees with me.”

Clegg did not extend this to the Chancellor George Osborne who is linked to the decline in investment in low carbon energy despite interventions from business organisations, financial institutions and members of his own party.

New energy and environment ministers John Hayes and Owen Paterson are both sceptical on climate change and the merits of renewable energy.

Clegg also told the panel of MPs that the Brazilian government had “pushed for a pre-arranged agreement” at the Rio+20 that was prepared before the arrival of high-level delegations.

Clegg claimed he had pressed, unsuccessfully, for the country’s Foreign Ministry to leave some issues on the table.