Republican members of an influential committee in Congress have indicated they will increase pressure on President Obama to approve the Keystone XL pipeline.

The Republican-dominated Committee on Energy and Commerce, will launch an “American Energy Security and Innovation” hearing series next Tuesday, focusing on the exploitation of oil, gas and coal in the USA.

While it has no direct legislative power, Washington observers tell RTCC the committee is influential and offers a platform for climate sceptics at the heart of US government. In 2009 Lord Christopher Monckton was invited to give evidence.

Congressman Ed Whitfield (R-KY) says the aim of the hearings will be to demonstrate that the USA needs to continue to exploit its vast reserves of fossil fuels for the foreseeable future.

“America has been blessed with an abundance of energy resources. The U.S. is home to the largest estimated recoverable reserves of coal in the world and we have billions of barrels of oil as well as potentially hundreds of years’ worth of natural gas reserves under our feet,” he said.

“Expanding access to these energy resources will remain a top priority this Congress as we continue to fight for common sense solutions like removing barriers to affordable energy supplies, such as coal, increased drilling, and approval of the Keystone XL pipeline.” 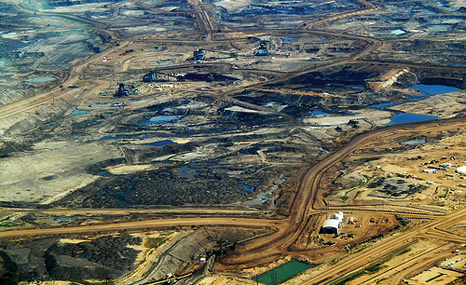 The $7 billion pipeline, which is partially built, would transport oil from the carbon intensive tar sands of north-west Canada to the gulf coast.

Because the pipeline crosses the US border, it’s down to the State Department rather than the Environmental Protection Agency to decide whether to give it a permit.

It will release an environmental impact report before making a call, which will offer an early test of new Secretary of State John Kerry’s climate credentials.

Kerry described climate change as “life threatening” during his nomination hearing, adding that he would personally take change of the Keystone decision.

The tar sands were recently rated as the sixth most dangerous ‘Carbon Time Bomb’ facing the world by Greenpeace, who warn that the world is currently on a pathway to warm by 5°C to 6°C.

Extracting oil from the Alberta sands creates 20-30% more carbon emissions than conventional production, and causes huge levels of environmental damage in the area due to the techniques used.

Campaign groups 350.org, The Sierra Club and the Hip Hop Caucus are planning to protest against the pipeline in Washington DC on February 17, five days after President Obama delivers his State of the Union speech.

Keystone is not expected to figure in this address, but Obama may outline other plans to address climate change including new regulations on carbon emissions from power plants.

A Congress insider who declined to be named told RTCC Obama was “inclined to approve it”, preferring to focus his resources on other challenges facing his administration.

Today’s announcement that the US economy unexpectedly shrank by 0.1% in the fourth quarter of 2012 could also influence that decision.

Republican Congressman Fred Upton, who chairs the Committee on Energy and Power – claims the pipeline and associated industries will create thousands of new jobs.

“You’ll remember that it was about a year ago that the president in a national address said he would do whatever it takes to create American jobs. This is 20,000 new American jobs,” he said.

“And for the Canadians, they’re going to be producing the oil from the oil sands no matter what. They’re going to build a pipeline west to Vancouver and then off to China” if the United States doesn’t approve the pipeline.” 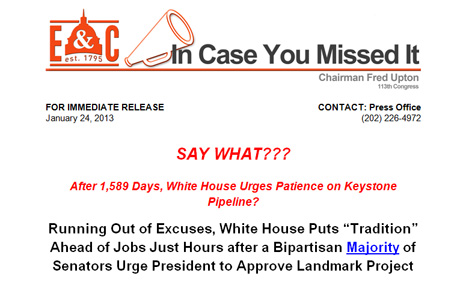