Nothing new about the UK’s New Nuclear debate

The Simpsons’ Mr Burns, proprietor of the Springfield Nuclear Power Plant once said: “A lifetime of working with nuclear power has left me with a healthy green glow… and left me as impotent as a Nevada boxing commissioner.”

Observing the UK nuclear debate can leave feeling a little green, not particularly healthy and impotent as far as the debate is concerned.

Name calling, accusations of bullying and favouritism, people not doing their homework and sinister best friends conspiring in the corridors.

Not a scene from the schoolyard but the UK nuclear debate encapsulated at a committee debate in the House of Commons on Tuesday night – whether it can still be termed a debate is also up for dispute.

The Electricity Market Reform bill has triggered this discussion and at its core there are four main topics: subsidies, climate change, safe storage and transparency.

The Sellafield nuclear power station is still at the centre of the UK nuclear debate in its new role as a waste processing plant. (Flickr/Newbeltane)

Projects can run over budget to the tune of billions and then there’s the cost of disposing the waste.

French energy company EDF has agreed to operate a new nuclear reactor at the Hinckley Point power station. It would generate low carbon energy at a time when we are told that the atmosphere can’t cope with any increase in CO2 concentrations.

Here’s how the subsidy works: The state will guarantee a fixed price per unit of electricity. If the wholesale price falls below that threshold, the government makes up the difference. It’s called a Contract for Difference (CfD),

Hergen Haye, head of new nuclear at the Department of Energy and Climate Change (DECC) was in attendance at Tuesday’s debate and said that this is not a subsidy. He is confident the agreement would pass EU criteria that prevents anti-competitive state-aid to business.

This did not wash with Caroline Lucas, a Green party MP, who replied: “I can’t stand all this ducking and diving and frankly, treating us all like fools”,  adding that claims the CfD is not a subsidy undermine the wider nuclear debate.

When a representative of one of EDF’s rivals asked what the difference was between this arrangement and his company getting a top up on prices for its energy from wind farms he received short shrift.

“I think that was a mischievous question,” said EDF’s head of new nuclear policy Nigel Knee before comparing the CfD to a variable rate mortgage.

The Oxford English Dictionary definition of a subsidy is “a sum of money given to help keep the price of a product low”. Make of that what you will. 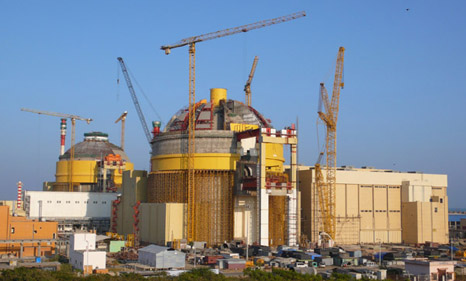 The nuclear debate has split green groups. Some stick to the same anti-nuclear arguments of the 1970s (plus some new ones).

Others like Mark Lynas and George Monbiot place climate mitigation first, particularly in the context of improving technology and smarter decommissioning practices.

Lynas backs a “nuclear for base load, renewables for the rest” energy mix, while many environmental NGOs insist that renewables alone can do the job. The UK government is planning a mix that also includes gas.

The trouble is these important aspects are not really being analysed. The focus instead is on government ‘U’ turns and whether it is lining the pockets of a company owned by the French state.

There is much less discussion about whether nuclear is essential to limiting global emissions, and even less about the science and engineering that ultimately defines whether or not a plant is safe.

Would you really like to live above tonnes of highly radioactive nuclear waste? It’s a hard sell, and the UK desperately needs a safe place to keep spent nuclear matter.

This week a local council in Cumbria voted against plans to excavate huge caverns 1000m below the ground to store nuclear material.

This is a massive blow to the industry, whatever leading scientists may say.

“It is only a blip, and in the big picture the UK’s programme of managing radioactive waste safely will continue to look for volunteers,” said Prof Bill Lee, Co-Director of the Centre for Nuclear Engineering at Imperial College London

“We can’t simply leave the waste in temporary container storage; it has to go into a proper disposal facility underground. That needs a combination of a community willing to host it and the right geology.”

Others are far less forgiving, accusing opponents of an awful crime – being a NIMBY.

“This is a short-termist, self-serving decision that does nothing to solve the legacy problems at Sellafield, and which will cost the country and locality much more cash in the long term,” said Dr Nick Evans , Senior Lecturer in Radiochemistry at Loughborough University.

Given that the site in question has the Heysham Nuclear Power station, the Sellafield Nuclear waste processing plant and a nuclear shipyard in Barrow-in-Furness all within a few miles this seems a little harsh, but it illustrates the problems governments face.

The government and nuclear industry have an unfortunate record of covering up accidents. The true impacts of the 1957 Windscale disaster were kept from the public at the time, and even an official report was censored.

This week MPs voted on a proposed amendment to open the books on negotiations between energy firms and the government. It was defeated by the coalition government.

Here’s the take of Greenpeace chief scientist Dr Doug Parr: “The vote was particularly significant for Liberal Democrat MPs. The party has always opposed any public subsidy for Nuclear power. In practice this vote will mean they can’t find out what they don’t want to know,” he said.

“It is scandalous that these coalition MPs, who are there to hold Government and Secretaries of State to account, have handed over such wide powers and have actively voted to allow the government to keep the public paying up in ignorance.”

Greenpeace is historically opposed to nuclear, but the vote reinforces an atmosphere of distrust.

The public are also increasingly suspicious of energy firms as bills rise, even when wholesale prices fall. Confidence in politicians is also at a low and many feel the two are working together to fit the new Electricity Bill around the needs of the industry.

As I left the House of Commons on Tuesday night I overheard a fascinating exchange.

Conservative MP: Oh, well I’m your man then. And off they went.

The MP in question has asked numerous question in parliament questioning renewable energy and supporting nuclear for the improvement of ‘energy security’.

The debate is back in the headlines, and sadly it has little to do with energy or the climate.