Fossil fuel subsidies are increasing, but new data suggests the source of the growth is from support for energy users rather than from handouts to big oil producers.

Data from the Organisation for Economic Cooperation and Development (OECD) shows that developed countries have been gradually reducing support for producers from a peak of $20bn in 2006 to around $17bn in 2011.

Canada (see below) gave around CAD$2.2bn in 2006/07 to support new exploration efforts. In contrast, Iran gives $82bn of subsidies a year to consumers and end users, Saudi Arabia $61bn and Russia $40bn.

Support to consumers and end users has risen by $20bn in the past two years.

Cutting subsidies has been identified as one potential source of climate change finance, receiving backing from the G20. Total subsidies in richer nations were in the range of $85bn. The global total was $523bn in 2011, up 30% from the previous year. 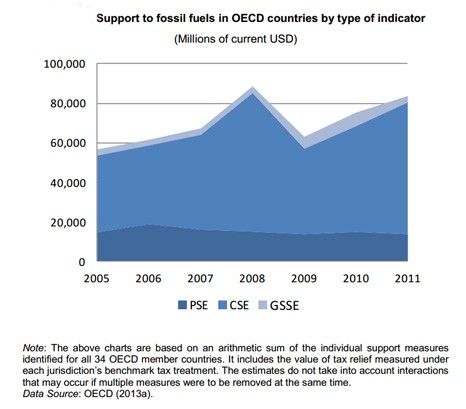 From top to bottom, the three shades represent support for end users, consumers and producers.

While many feel fossil fuel subsidies line the pockets of an already highly lucrative industry, it appears now that that trend is on the wane and support for consumers and big energy users, are driving all this growth.

Some subsides are used to make fuels accessible to some the world’s poorest people. Removing these is incredibly sensitive with one such cut in support in Nigeria triggering riots in 2012.

Last year IEA Deputy Executive Director Richard Jones told RTCC that some Gulf nations were turning to energy efficiency measures so they could cut consumption without having to increase prices and risk the kind of backash seen during the Arab Spring.

“They want to continue to keep the price of energy low but they don’t want to forego the revenues that they receive by exporting it. So they’re trying to find ways to get their people to use as little of it as possible,” he said.

Fossil fuel subsidies in the OECD

European solar and wind energy leader Germany has been recently been increasing its use of coal for electricity production following its decision to shut down its nuclear energy plants. Despite this, support for coal producers has more than halved from €5bn in 1999 to €2bn in 2011.

Despite its reputation as a “pariah” at the international climate change talks and the criticism it receives for exploiting the carbon intensive tar sands oil deposits, support for producers is falling here too.

A CAD$2bn-plus tax exemption for energy products ran out in 2008.

The outlook in the US is more complicated but most of the movement has been in the gas sector where there has been a big push to support the “shale gas revolution”.

Texas offered the most assistance at $1.1bn down from $1.2bn the previous year.

Support for consumers has increased slightly on a state by state and federal level. A scheme for heating bills in ion low income homes has ballooned from $672mn in 2005 to $1.7bn in 2011. This is not typically the kind of scheme environmentalists campaign against.