China’s demand for coal set to soar despite Beijing smog

We’ve all heard the statistic, or at least one version of it. China opens a new coal power plant everyday, sometimes it’s one a week, sometimes two a week.

The US Energy Information Administration (EIA) announced this week that China now uses almost as much coal in a year as the rest of the world combined.

“The pace changes but at the peak they were building the equivalent of a 200MW coal power station every day,” says Carlos Fernandez Alvarez, Senior Analyst, International Energy Agency (IEA) and author of its milestone coal report published last year.

China is also the largest source of emissions.

While it is quick to point out that its emissions per capita are low in comparison, it doesn’t change the fact that it makes the biggest contribution to atmospheric CO2. 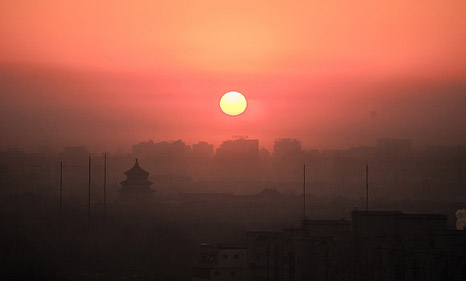 Time to clear the air

While not all the pollutants responsible for smog are necessarily greenhouse gases, the two tend to go hand in hand.

Using coal for electricity generates more CO2 than gas or oil fired power plants. It also pumps sulphur dioxide and particulate matter into the air – these are tiny carbon particles that have serious health impacts.

Tackling short term atmospheric warmers and pollutants such as soot and other forms of black carbon is becoming an increasingly popular approach to tackling climate change, given the more politically acceptable health benefits that it brings along with it.

The Climate and Clean Air Coalition (CCAC), which includes the US, Bangladesh, Ghana and the UK, is targeting these and other greenhouse gases, with the added benefit of clean air, better health and improved quality of life.

Writing for RTCC today, Beijing resident Terry Townshend says the pollution is “suffocating”. Clara, a European expat who has lived in the city since 2008 agrees.

“You shouldn’t be able to see the air at night, it’s depressing. It feels apocalyptic when I go to work in the morning,” she says. “Usually the smog clears after a few days but this current episode has lasted more than a week.”

She says many of her Chinese colleagues attribute this to the cities unfortunate geography, trapped in a basin with desert on one side and heavy industry on the other.

This makes them fatalistic about the smog with many hoping for a solution but accepting of the fact that there is no quick fix. The coal power stations within Beijing’s suburbs do little to help the cause.

While the government has received plaudits for the efforts that it is making to reduce the impact of its economic growth, the size of its emissions output dilutes these efforts.

“They build bigger nuclear plants than the French, more wind than the Germans but despite this, because of the size of the demand for power, they are still 70% reliant on coal. So this diversification is better than nothing, but it won’t dramatically change the picture,” says Alvarez.

“There are many good steps but they are small. It’s important to put these things in perspective.”

“People think China is using 19th century technology for their coal generation but that’s not the case anymore. They are building super critical plants, the most efficient in the world.

“The efficiency of their coal generation improved 16% in a decade. But when you are burning 4bn tonnes, you can be as efficient as you want but the CO2 emissions will still be huge.”

Alvarez believes CCS is the only viable long-term solution to chip away at this massive coal consumption. The issue is that the technology is not yet cost effective.

“We only mention it once or twice in the whole of the [143 page] IEA coal report. Even that is only to say that we don’t have any working at the moment. That’s a clear assessment of where CCS is at the moment,” says Alvarez.

India is the next big growing market for coal with imports in the rise. Despite this, Alvarez stresses China is still in a league of its own when it comes to coal use.

“Yesterday I prepared a slide on coal capacity additions for my boss and I had to use two different scales on the graph, 100GW for China and 10GW for India, it is way behind,” says Alvarez.

“Chipping away” at the problem of China’s coal as Alvarez describes it is the best we can do for now, until emissions from coal stations can be effectively trapped and stored long term.

There are reasons to stay positive. Canada is on the brink of launching a milestone CCS project for coal, while China is investing in CCS research free of the political barriers that are holding back development elsewhere.

Unfortunately it will take decades to feel the benefits of these technologies – bad news for  climate change and Beijing’s suffocating citizens.