Former US Vice President Al Gore says he is concerned the UK’s political leaders have lost their will to address climate change.

In an interview on Channel 4 News Gore said it was “short-sighted” to put business interests before the environment, arguing that such policies were “seriously misinformed”.

“There were such hopeful signs when Prime Minister Cameron came into power,” Gore said. “I have worried that there are influences within his party that have backed him off, but I don’t give up hope.”

Many observers believe Chancellor George Osborne is behind ‘anti-green’ measures within the current coalition government, backing an electricity strategy based on gas and reducing incentives for renewable technologies. 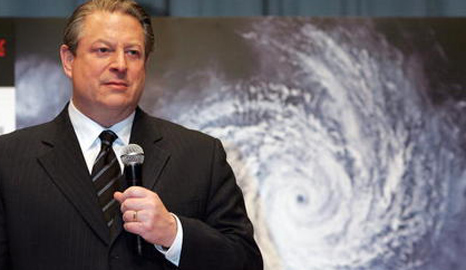 Asked if he understood why politicians might see a conflict between a strong economy and concern for the environment, Gore said it was increasingly clear failure to address climate change would ultimately damage a country’s economic prospects.

“Anyone who opposes direct conflict between the health of business, health of the planet and health of the environment is seriously misinformed,” he said.

“Business suffers from flooding and from drought, from wind storms. Sustainable business prosperity has to be based on a view of the future that is grounded in facts.

“We presently put up 90 million tonnes of global warming pollution every 24 hours. The extra heat trapped each day is the equivalent of the energy released in 400,000 Hiroshima bombs, every single day.

“This is disrupting the water-cycle, it is disrupting the balances in nature that are important not only to living spec but also to business. It is short sighted indeed to believe the future of business and environment are in conflict – they are not”