John Kerry’s appointment as Secretary of State has received a positive welcome from green groups on both sides of the Atlantic.

The Senate voted 94-3 for Kerry to replace the departing Hillary Clinton. Those against were Senators Ted Cruz, John Cornyn and climate sceptic Jim Inhofe.

According to the Washington Post, Inhofe said that he was concerned Kerry will make global warming a “centerpiece issue”.

Judging by the comments below – many are hoping the experienced politician, who tried and failed to introduce a cap and trade legislation in 2010 – does exactly that.

Scroll down for reaction and tweets below. 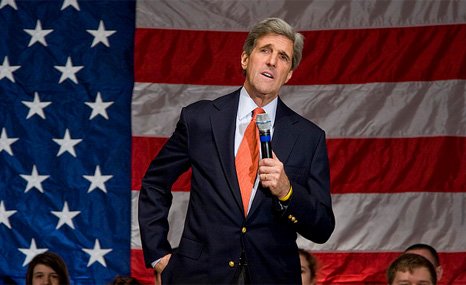 At a time when neither conflict, economic uncertainty nor environmental disaster respect international borders, our nation’s top diplomat must advance American interests by helping to create a more peaceful, prosperous and sustainable world. We take great confidence in Kerry’s record of commitment and achievement and we look forward to working with him and his team.

Senator Kerry is a superbly qualified public servant who will bring to his new post a deep understanding of issues at the confluence of international diplomacy, national security, economic growth and environmental protection, along with a demonstrated willingness to lead on climate change — the signal environmental challenge of our time.

Good to see Kerry confirmed by US Senate, hope climate will be high on his agenda for next few years

New US Secretary of State John Kerry plans to be a climate change activist theblaze.com/blog/2013/01/2…

Evan Juska, Head of US Policy, The Climate Group

No one has worked harder to advance climate change solutions in the US Congress than John Kerry. He can’t change the dynamics that have slowed the international climate negotiations to date, but he has a passion for the issue, and he knows how to broker compromise, which bode well for progress on the opportunities for reducing emissions that lie before the international community today.

The League of Conservation Voters (LCV)

The President has chosen an ally to lead the State Department. Senator Kerry is a true leader on climate change and other environmental issues and has spent his career advocating for policies that are good for our planet and our national security. LCV looks forward to working with Secretary-designate Kerry to combat the climate crisis, reject dirty fuels and build on Secretary Clinton’s extraordinary record of success.