What can UN climate talks learn from mercury agreement?

Every time you flick a light switch, you use a little mercury. If you have had the misfortune of visiting a dentist recently, you might have a little lump of it in your mouth right now.

It has been largely phased out of battery manufacture already with new and improved solutions filling the void. International environmental talks have all but eradicated ozone destroying CFC’s, and following talks in Geneva last week, mercury now faces an even more limited future.

As with the Montreal Protocol, the Minamata Convention (named after a city in Japan that was devastated by mercury dumping) targets a narrow group of chemicals with scientifically proven negative impacts.

After 10 years of negotiations, 140 countries signed up to a legally binding instrument to tackle mercury pollution, limiting its industrial use and establishing a financial mechanism to support the changes.

The International Institute for Sustainable Development (IISD) tracked the talks and said they were “marked by a sense of purpose and spirit of cooperation”.

In contrast the latest round of UN climate talks in Doha was peppered with stalemates, finished 27 hours late and left many with a bad taste in their mouth.

So why is it so much harder to address greenhouse gas emissions in the same UN format?

There are significant differences between the climate and the mercury talks that have just concluded.

Farhana Yamin is a Visiting Professor at University College London and special advisor to EU climate commissioner Connie Hedegaard. She has some experience of the different sets of talks, and told RTCC about the most significant gulfs between the two processes.

“Two really stand out: First, the US leadership and that of the EU and Nordic countries too,” she says. “All these developed countries already strictly control mercury in its life cycle. Unlike greenhouse gas emissions, where they haven’t really done regulation in quite same way, or as early.

“Second, mercury is used in very specific processes and products. Replacements are available and efficiency can dramatically lower mercury emissions.

She adds: “CO2 is just everywhere and there is no real alternative that is readily available, sufficiently cheap and widely acceptable. Carbon Capture and Storage (CCS), nuclear, REDD, they are all too controversial for different reasons”. 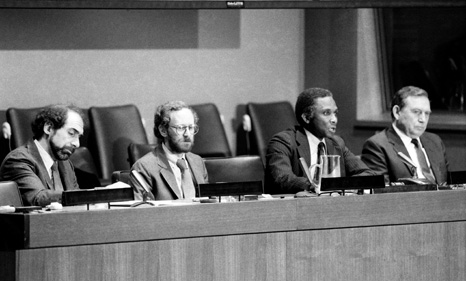 One of the main stumbling blocks facing Minamata was, unsurprisingly, finance, although the sums involved are relatively small.

As a sign of good faith, Norway made a pledge to the interim pot of money ease the tension – the contribution was just over $1m, (climate finance has topped $10bn in each of the last three years).

The Nordic countries, the EU and the US have been credited with pushing these talks forward during the past ten years.

An agreement was reached to funnel money through the existing Global Environment Facility (GEF) – a painless process when you compare it to the five years plus the Green Climate Fund has taken to get close to operating.

Talks on longer term finance assumed similar lines to the climate talks with the rich/poor divide emerging early on. These were resolved without too much drama with the final text stating that developing countries who are able “should” make some financial contributions.

Concerns that GEF wouldn’t be able to meet the differing technical needs of each individual developing nation were addressed by assigning some funding responsibility at a national level to provide more tailored solutions.

Some attribute the success of the Montreal Protocol to active lobbying from the chemical industry who were ready and waiting with new products to sell as CFC replacements.

The problem, the solution and the benefits were clear. Consensus during 1987’s talks in Montreal was virtually inevitable.

And as Oxford University’s Nicholas Chan explained in an interesting article for RTCC last September, the structure of those talks and the desire for a perfect solution all can sign up to have informed environmental negotiations ever since.

Waiting for technologies to catch up is not an option given the rate of progress with CCS and the urgency required to avoid dangerous levels of warming. But as Yamin points out, the now 20-year-old climate process has picked up political baggage along the way.

“The climate change negotiations have become more polarized and ideological than need be, partly because of the equity issue. It has been cleverly used by some to focus on bigger issues such as trade and economic imbalances,” she says.

One of the ways this debate manifests itself is over the transfer of technology to ensure every nation can gain access to low-carbon energy, or in the case of Minamata, alternatives to mercury.

Countries without the means to address the problem, whether it’s about shifting to low carbon energy sources or updating industrial processes to remove mercury, are always going to be understandably reluctant to commit to do so.

Knowing that this support will come, on the other hand, builds trust between negotiators and accelerates progress.

“The perverse rules of procedure in the climate change negotiations give a disproportionate weight to smaller extremist factions. A bit like proportional representation voting systems in some countries! This is something we could fix but haven’t done so far,” says Yamin.

Simplifying the process and treating greenhouse gases in a harsher light could make a contribution too.

“The time is now ripe for CO2 to be considered a ‘toxic’ pollutant like mercury. It already is in some countries but the sceptics have fought that tooth and nail,” she says.

The US opposed a global treaty on mercury until a dramatic u-turn at a UNEP meeting in 2009 where it sprung a surprise.

With Obama just getting his feet under the table at the Oval Office, the US delegation declared work on a global agreement should start anew.

“Skeptics doubted that the U.S. position on mercury could change so quickly, but the Obama administration made it happen in record time,” said Susan Egan Keane of the Natural Resources Defense Council at the time of the announcement.

The signs are something may be stirring at the climate talks.

At the most recent round of UNFCCC negotiations in Doha, progress on ‘equity’, and the signs of a shift in the USA’s traditionally stubborn position on this issue showed signs of easing.

In Durban in 2011, US lead negotiator Todd Stern told the EU, India and China: “if equity is in, we’re out”. But in Doha, he introduced the idea of tackling equity head-on.

“There should be time and space to have serious discussions this year about how to understand equity and CBDR in the new world that we are trying to negotiate for,” he said.

There are other stirrings too in Washington with new faces, not least of all incoming Secretary of State John Kerry, a high-profile climate campaigner.

Perhaps what the mercury and ozone talks demonstrate is that dealing with single issues is usually more productive in a multilateral setting.

Greenhouses gases are integral to the current shape of our economy, and it is ludicrous to ban their emission outright, but the piecemeal strategy of previous conventions could still provide some value.

The Climate and Clean Air Coalition (CCAC) targets short term climate forcers, potent greenhouse gases that don’t linger in the in the atmosphere as long as CO2 or are emitted in the same volumes.

Initially started by the US, the scheme now includes Ghana, Mexico, Canada, Bangladesh among its members. Targeting Black Carbon (soot) has been identified by a recent study as the second largest contributor to climate change.

News of multilateralism’s death could be premature.

There is a willingness to avoid the consequences of climate change among the international community but perhaps it is the scope of the UNFCCC talks, not the participation that needs to be addressed.

Strict rules on big emitting processes such as limiting gas flaring by fossil fuel production or encouraging stiff vehicle efficiency rules could provide a piecemeal route to progress on staving off dangerous levels of warming.

If this is the case technology transfer becomes an integral part of a global climate deal deserving of far greater interest and NGO scrutiny than it currently receives.

Montreal and Minamata have sketched out the shape of a successful international environmental agreement, but with time running out to stay within 2°C, it could yet prove to be the chalk outline of a dead deal.