We have selected the highlights from Globe’s analysis of Argentina’s  attempts to address climate change.

Argentina is a relatively small emitter of greenhouse gases and, as a non-Annex I country,  has no current obligation to reduce its emissions.

Despite this, Argentina has initiated a number of policies and measures that will lead to a reduction in emissions of warming gases measured against a business as usual scenario.

The main focus of Argentina’s climate-related legislation is on energy.

The government has implemented a comprehensive and far-reaching strategy to increase energy efficiency – in recognition that reducing energy demand is cost-effective – and, at the same time, has set targets for renewable energy supply.

Together, these measures will increase energy security whilst, at the same time, reducing emissions. 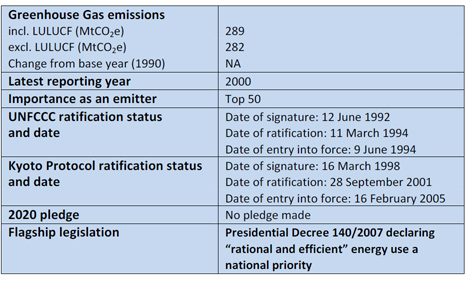 Political background
Legislation, or regulation related to climate change, has been particularly difficult to enact in Argentina. The country experienced a severe recession from 1998 until 2002, and an acute crisis in 2001, after which nearly 60% of the population was plunged into poverty. During the last decade, the federal government’s priority has been economic recovery and growth.

Investments necessary to mitigate emissions and adapt to climate change are conceived as politically pitted against social investments in health, education and poverty reduction in a zero‐sum game. As such, Argentina has neither enacted comprehensive legislation related to climate change nor made an  official pledge to reduce GHG emissions by a measurable difference.

The country ratified the United Nations Framework Convention on Climate Change (UNFCCC) in 1993. In 2001 it ratified the Kyoto Protocol, where it is classified as a developing country with no emission commitments.

Energy legislation
The National Program for Rational and Efficient Energy Use says it will reduce demand for electricity by 2,400 MW by 2015 and a lead to a 28 million tonne reduction in CO2 emissions (between 2006 and 2015).

Argentina has made the use of biofuels obligatory for all liquid fuel types used for transportation, while similar legislation related to renewable sources of electricity stipulates that by 2017, 10% of all electricity consumed must come from renewable energy sources.

Education
Modules related to the natural environment, protection of natural resources and prevention of pollution must be included in primary and secondary school curricula. Later congressional legislation and presidential decrees have mandated that climate change material also be included.

Law 26473/2010 – Aimed at cutting energy demand from lighting. Prohibits the importation and commercialisation of incandescent light bulbs for residential use throughout the country.

Law 26.123/2006 – Declares the technological development, the production of, and the use of hydrogen fuel, as well as other alternative energy sources, a matter of national interest.

National Decree 1070/2005 – Aimed at creating the National Argentine Carbon Fund (FAC) and to incentivise projects within the framework of The Clean Development Mechanism. By the end of 2006, projects participating in the fund were estimated to have avoided 27 million tonnes of CO2 equivalent.