The EU carbon market faces a sustained period of low prices after planned reforms were voted down by a European Parliament committee.

The Industry, Research and Energy committee (ITRE) rejected plans to postpone the sale of 900m carbon credits, also known as backloading, in an effort to tackle the glut of credits and lift the price.

This sent prices tumbling to a record low of €2.81.

While the vote is essentially little more than the committee’s opinion, it is also a indication of how the plans would be received by MEPs.

“We might have to wait for a new tranche of MEPs to have another go after the 2014 election, that means no action till 2015. Until then we are going to be looking at some pretty flat carbon prices,” he said.

Prices are low after the economic downturn trimmed industrial activity and related emissions. This has helped those taking part in the Emissions Trading Scheme (ETS) to meet their targets without the need to buy up extra credits.

”On a day where the carbon price at some point went below €3 it must be clear to all that when the Commission warned that the ETS price could drop dramatically it was not a false warning but a real possibility. This is not the time to put the backloading on the backburner,” said EU climate commissioner Connie Hedegaard. 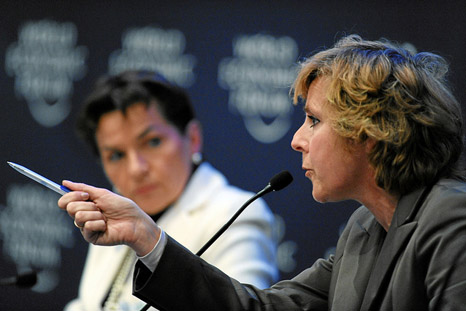 “To those in industry who both say that they want a strong EU ETS while they at the same time lobby against the policy that can secure exactly that I will say: It is time to think twice,” she added.

The EU’s 20% emissions reduction target is on track, meaning there is not only an oversupply of emissions allowances, but also an “under demand” – a term used by UN climate chief Christiana Figueres.

Burchett does not expect the troubles of the ETS to lead to an increase in the 2020 target from 20 to 30%.

“If they can’t agree on a fairly unambitious target of 900m credits it doesn’t bode well for the agreeing on a more meaningful, ambitious policy intervention,” he said.

“You have to wonder how much longer this is going to go on. I don’t think they would ever decommission the ETS. It would be too much trouble and so many people have a vested interest in this working. The legal implications would create too much trouble.”

Poland and other central European countries with a dependence on carbon intensive coal are concerned that they would suffer disproportionately from a high carbon price and are leading the opposition to reforms.

Investors are also concerned with yesterday’s news, questioning how the decision could be in the best interest of the ETS.

“Without backloading it’s hard to see how the EU ETS will remain relevant for future climate policy as it will be driving little significant change, certainly not at the scale needed for Europe to promote a low-carbon economy and remain internationally competitive,” said Miles Austin, executive director, Climate Markets and Investment Association (CMIA).