Glaciers in the tropical Andes are in retreat. They are losing ice at an accelerating rate and, in the most comprehensive study so far, scientists identify the cause as atmospheric warming.

A team from France, Switzerland, the US, Bolivia, Peru, Ecuador and Colombia report in the journal The Cryosphere, published by the European Geosciences Union,  that they tried to measure the mass of ice at high altitude and compare those measurements with records that date back more than 60 years.

They conclude that – although the glaciers have been retreating ever since the coldest point of the Little Ice Age between the 16th and 19th centuries – this retreat is now at an unprecedented rate: the fastest for 300 years.

Atmospheric temperatures have warmed by 0.7°C in the last 50 years. Rain and snowfall levels have not changed significantly, and cannot explain the accelerating loss of ice, so atmospheric warming must be the cause. 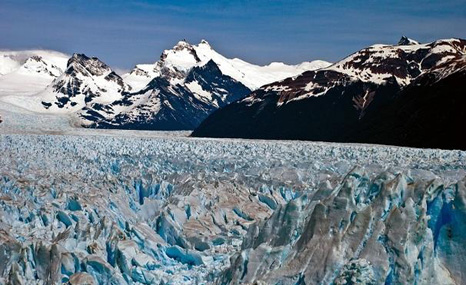 Glaciers provide about 15% of the La Paz water supply throughout the year, increasing to about 27% during the dry season

In fact, accelerating rates of glacial retreat have been reported consistently over much of the northern hemisphere in recent decades.

But the tropical Andes are a special case. They are home to 99% of all the glaciers in the tropics, and are therefore particularly sensitive indicators of climate change.

Millions depend on the seasonal melt water to provide drinking water, irrigation for crops and hydroelectric power in the region.

Not surprisingly, the glaciers at low altitudes – those below 5,400 metres – are melting at the greatest rate: losing 1.35 metres of thickness of ice a year on average since the late 1970s.

“Because the maximum thickness of these small, low-altitude glaciers rarely exceeds 40 metres, they will probably completely disappear within the coming decades”, says Antoine Rabatel, of the Laboratory for Glaciology and Environmental Geophysics in Grenoble, France, who led the study.

Altogether, the scientists surveyed 1,000 square kilometres of glacier – about half of all the area covered by ice in the mountains at the beginning of the century.

They collected data and used remote sensing, satellite imagery and aerial photographs to monitor the changes.

“The ongoing recession of Andean glaciers will become increasingly problematic for regions depending on water resources supplied by glacierised mountain catchments, particularly in Peru,” they report.