Fox Business has reported that governments are demanding a $14 trillion commitment to combat climate change during the World Economic Forum in Davos.

The three presenters (I think the collective noun for Fox anchors is a coven) explain that the report recommends $700bn a year of spending until 2030 to fund low carbon energy and climate adaptation projects.

Fox have then multiplied that number by 17, the number of years left till 2030, and asked where the reports cumulative figure of $14 trillion has come from.

Fox, not known for its subtlety, waded in with a condescending mocked-up blackboard with the WEF’s sums chalked onto it under the heading “Davos Funny Math”. 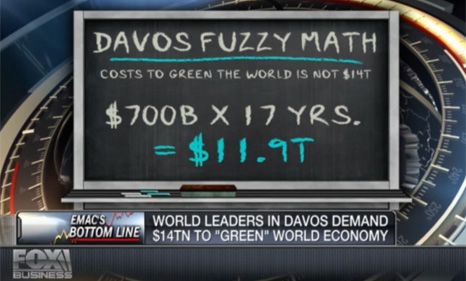 Watch the maths in realtime on the Fox Business website

Had they read the report it was based on they would have seen that the cumulative figure was based on the period 2010-2030. As everyone who knows their 700bn times table will tell you, $700bn multiplied by 20 is indeed $14 trillion.

The news network has a history of climate scepticism, often joining forces with its fellow Murdoch-owned newspaper the Wall Street Journal in rubbishing climate science and policy.

With the maths settled, it’s time to look at the claim that world leaders are “demanding it”.

The report was written by the consultancy Accenture with input from the World Bank, the Climate Policy Initiative and the World Resources Institute among others.

The only political figure attached to the study is former Mexican President Felipe Calderon who formed the Green Growth Action Alliance, the arm of the World Economic Forum (itself an NGO) that commissioned the study.

Environmentalists would be delighted if the world’s government’s were looking to sow together a coherent fund of $700bn a year.

At present they have only committed to source $100bn a year by 2020 from public and private sources.