A new NASA satellite image demonstrates the huge scale of Australia’s heat wave that smashed a series of records and enabled huge wildfires to rage across large sections of the country.

The NASA image shows temperature anomalies, the amount that measurements were above or below average, with dark red 15°C above and dark blue 15°C below. 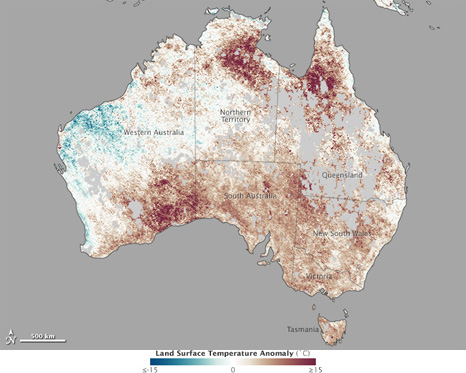 The period of intense heat earlier this month saw a new shade of purple added to some weather maps to account for temperatures above 50°C.

It has been described by Australian meteorologists as “very unusual” and Rajendra Pachauri, chair of the Intergovernmental Panel on Climate Change (IPCC) has said it is likely a symptom of continued climate change.

“If you look at the trend then I think that’s pretty unmistakable and any proper analysis would tell you that we are heading in that direction,” he told ABC radio during a recent IPCC meeting in the country.

The US also experienced extreme heat with 2012 the warmest year in record. Drought affected more than 60% of the country during July 2012 causing $20bn of agricultural losses.

Other extreme events plagued the USA throughout the year.

While one erratic set of results cannot be attributed to climate change in and of itself, the stacking up of temperature records in the past 10 years and the rising average temperatures on a decadal scale, present increasingly strong evidence of climate change.

The last four months of 2012 set a national temperature anomaly record of +1.61°C

A new high for the overnight minimum temperature 32.36°C was also set that night

Sydney witnessed its hottest day on record on January 18 with temperatures hitting 45.8°C