Star Trek, Piers Morgan and the US climate change debate

Despite the weird weather and the US election, coverage in the media of climate change fell 2% in 2012.

Hurricane Sandy did its level best to change that at the end of 2012, while President Barack Obama promised it would be top of his ‘to do’ list in his inauguration speech last night.

But if politics and national positions are merely a reflection of what the public want, then perhaps we shouldn’t expect too much too soon.

We’re basing this none-too-scientific prediction on entries into the White House’s We the People online petition website. If your entry attracts 25,000 signatures (the bar used to be set to 100,000) the Administration promises to get in touch.

And last week Hollywood actor Mark Ruffalo (aka Incredible Hulk in the Avengers) opened a new petition calling for a ‘war against climate change‘. 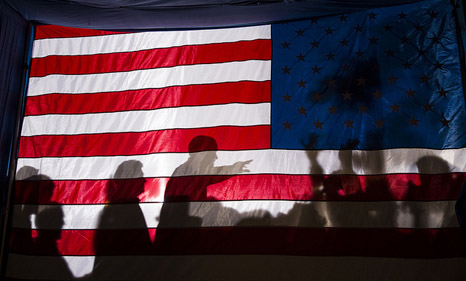 After seven whole days, Ruffalo’s petition has just under 6000 supporters, despite being tweeted to his 370,000 twitter followers. That’s pretty poor – almost embarrassing.

Assign NASA to do a feasibility study and conceptual design of the Gen1 USS Enterprise interplanetary spaceship. 7242 signatures

End to the War on Coal, end the job killing policies of the EPA and require an economic impact analysis of new policies. 28,303 signatures

Make the metric system standard in the United States, instead of the Imperial system. 33,855 signatures

It is however, beating…

Allow the import and sale of Kinder Surprise Eggs in the United States (4170 signatures).

Regardless of whether media and political silence is to blame thus far, both have a role to play in driving it up the agenda now. Many will look to President Obama to take the lead during his second term – and yesterday’s inauguration speech suggested that’s what he intends to do.

“We will respond to climate change knowing that the failure to do so would betray our children and future generations. The path to sustainable energy will be long and difficult. The US must lead it and claim its promise,” the President said.