Marine scientists in Germany have calculated the effectiveness of “fertilising” the oceans with minerals to change their chemistry and absorb more of the atmospheric carbon dioxide they receive and thus reduce the risk of further global warming.

The technique would work. But it would also involve the massive additional use of energy on a global scale and in the course of doing so release further quantities of carbon dioxide into the atmosphere.

And in the end, it could make only a small difference to overall emissions.

Almost since climate change was first identified as a looming challenge, scientists have been considered technological ways of countering the worst impacts.

Their advice is that the most effective answer is to limit emissions in the first place. 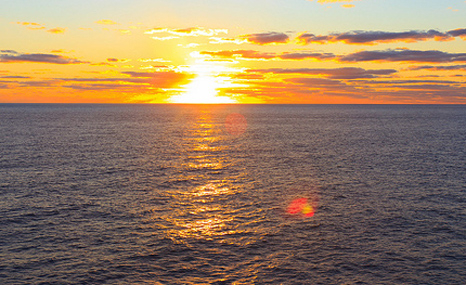 But they have also proposed global “sunshades” created by the release of sulphate aerosols into the upper atmosphere; spraying fine mists of seawater high into the air to intensify the reflective surfaces of clouds; and seeding the oceans with minerals to alter their capacity to serve as a natural “sink” for the extra carbon dioxide.

Around 70% of the planet is blue water: it is home to teeming algal life that harnesses sunlight to exploit carbon dioxide for growth. But this growth is limited by the availability of other nutrients – among them iron.

Peter Köhler and colleagues from the Alfred Wegener Institute for Polar and Marine Research in Bremerhaven considered the advantages of spreading finely crushed olivine rock – a common magnesium-iron silicate – in the seas.

They report in Environmental Research Letters that three billion tonnes of this marine manure spread every year could at best compensate for only about nine per cent of present-day discharges of carbon dioxide from factory chimneys, power plants, vehicle exhausts and agricultural systems.

The olivine would have to be crushed into tiny particles with a diameter measured at around a millionth of a metre, to sink very slowly and dissolve at levels where it could be most effective.

Rainwater dissolves carbon dioxide to become a weak carbonic acid, and the oceans have been gradually growing more acidic as greenhouse gas emissions rise. So the delivery of minerals would make the oceans more alkaline, and thus able to take up even more carbon dioxide.

As a bonus, the same minerals would also encourage plant growth.

This geoengineering solution is in a sense the extension of a natural one – rivers deliver fine particles of rock to the ocean in huge quantities every year – but the researchers warn that it would require a rock mining industry as big as the global coal mining industry.

Huge amounts of energy would also be needed to crush the rock to the finest dust, and an armada of 100 large ships would need to go in and out of ports 32 times a year each to ferry just one billion tonnes – one Gigatonne (Gt) – of olivine to the right stretches of sea.

It would take 40 gigatonnes a year to balance the present-day emissions of carbon dioxide.

“Taking all our conclusions together – mainly the energy costs of the processing line and the projected potential impact on marine biology – we assess the approach as rather inefficient,” said Dr Köhler. “It is certainly not a simple solution against the global warming problem.”

RTCC VIDEO: Could giant sunshades hovering above the earth help cool the planet?