We will respond to the threat of climate change, knowing that the failure to do so would betray our children and future generations. Some may still deny the overwhelming judgment of science, but none can avoid the devastating impact of raging fires, and crippling drought, and more powerful storms.

The path towards sustainable energy sources will be long and sometimes difficult. But America cannot resist this transition; we must lead it. We cannot cede to other nations the technology that will power new jobs and new industries – we must claim its promise.

That is how we will maintain our economic vitality and our national treasure – our forests and waterways; our croplands and snowcapped peaks. That is how we will preserve our planet, commanded to our care by God. That’s what will lend meaning to the creed our fathers once declared.

“The Sierra Club is heartened by President Obama’s remarks today in his second inauguration and his renewed vow to respond to the threat of climate disruption.

“Indeed, in America, our possibilities are limitless, and the Sierra Club’s 2.1 million members and supporters urge the president to cement our nation’s position as the global clean energy leader by going all in on sustainable energy, holding polluters accountable, and rejecting the dangerous tar sands pipeline. We will work tirelessly to ensure the transition to safe, clean energy sources to fight the most pressing challenge of our time.”

“The President said it exactly right: ‘We will respond to the threat of climate change, knowing that the failure to do so would betray our children and future generations.’

“We at EDF share the sense of urgency President Obama described. We are fully focused on working with him and many others to achieve climate security and American clean energy innovation.” 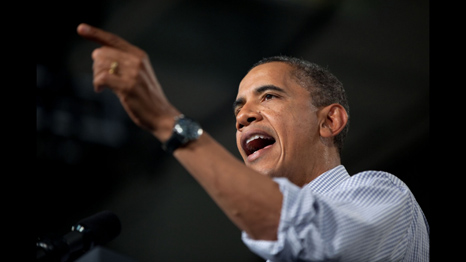 President Obama said the transition to sustainable energy was an economic opportunity that should be seized (Source: White House/Pete Souza)

“The President is poised to continue speaking out about the dangers of global warming. Even better, he is poised to act. I look forward to working with President Obama and his administration to do what it takes to tackle the challenges ahead.

“It’s heartening to hear President Obama make climate change a key point in his inaugural address–we need his leadership on this issue now more than ever.

“The President should lay out the steps he can and will take to clean up our energy system, help communities prepare for climate disruption and encourage the rest of the world to ramp up action.”

“In the coming months, we look forward to the Administration following through on the president’s ringing call to action. It will be particularly important to move forward with emissions limits on existing power plants and to use other existing federal authorities to reduce greenhouse gases and drive clean energy technologies.

“The president has already committed to launch a ‘national conversation’ on climate change—this discussion will be critical for communicating global warming’s risks and building momentum, both locally and nationally. In addition to national action, we look forward to a strong foreign policy agenda with climate playing a key role — including bringing a serious, ambitious plan to the UNFCCC international climate negotiations.”

“The way the President spoke about climate change in his remarks today was exactly right. Addressing the threat of climate change is about protecting the future for our children and future generations, our most sacred obligation.”

“Over the next four years, we are counting on President Obama to set tough limits on carbon pollution from power plants, continue investing in the development of clean, renewable energy sources, including wind and solar power, and to implement dramatic energy efficiency improvements that will cut dangerous pollution and protect our environment and our families.

“The question is whether he will be satisfied with the progress he’s already poised to achieve, or if he will insist on the Clean Revolution the world really needs. A Clean Revolution will enhance our national and energy security, future-proof our infrastructure and boost jobs, and therefore our economy.

“The latter road will not be easy, and will require a measure of public engagement and bipartisanship unmet in his first term. But it is the only one that will lead to a truly secure and prosperous future. His legacy may not depend on it. But the climate certainly does.”

“President Obama’s clarion call to action on the threat of climate change leaves no doubt this will be a priority in his second term.

“It will take a sustained campaign by the President, his Cabinet officials, and the rest of his team to mobilize the American people in support of this effort and to overcome the opposition of entrenched interests to the rapid transition away from fossil fuels that’s needed to stabilize the climate.”

Video: Obama on the “betrayal” of failing to respond to climate change