Obama calls on US to seize opportunity of clean energy revolution

US President Barack Obama made climate change a central theme of his inauguration speech today calling for business to embrace a green revolution.

Speaking on Capitol Hill in Washington DC, the President framed the climate issue in terms of the economy and triggered spontaneous cheers at the mention of climate change.

“We will respond to the threat of climate change, knowing that the failure to do so would betray our children and future generations,” he told a crowd that dwarfed all but his own previous inauguration.

“Some may still deny the overwhelming judgment of science, but none can avoid the devastating impact of raging fires, and crippling drought, and more powerful storms,” he said in reference to the a year of turbulent weather in the US.

The President received a boost in the polls when Superstorm Sandy struck the east coast of the US just prior to the election. Sandy sent support for climate action soaring and made the Republican’s more sceptical approach unpalatable to some undecided voters.

Severe drought affecting more than 60% of the nation at its height, also built support for a response to climate change.

“The path towards sustainable energy sources will be long and sometimes difficult. But America cannot resist this transition; we must lead it. We cannot cede to other nations the technology that will power new jobs and new industries – we must claim its promise.

“That is how we will maintain our economic vitality and our national treasure – our forests and waterways; our croplands and snowcapped peaks. That is how we will preserve our planet, commanded to our care by God. That’s what will lend meaning to the creed our fathers once declared,” he said. 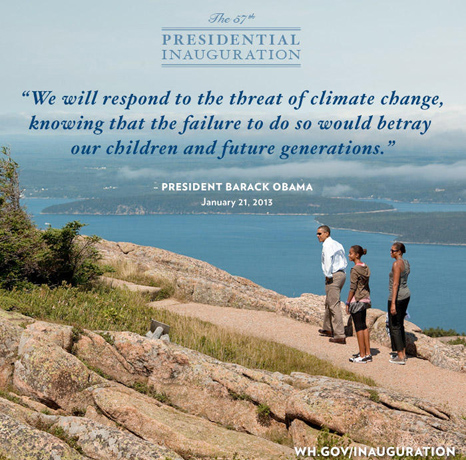 Campaigners have been calling for a more prominent debate on climate change in the US and will be encouraged by today’s speech.

“The President should lay out the steps he can and will take to clean up our energy system, help communities prepare for climate disruption and encourage the rest of the world to ramp up action.”

Amy Davidsen, US Executive Director with The Climate Group was also welcomed the statement, but warned that he may need to go further than the policies already in the table.

“The question is whether he will be satisfied with the progress he’s already poised to achieve, or if he will insist on the Clean Revolution the world really needs. A Clean Revolution will enhance our national and energy security, future-proof our infrastructure and boost jobs, and therefore our economy,” she said.

“The latter road will not be easy, and will require a measure of public engagement and bipartisanship unmet in his first term. But it is the only one that will lead to a truly secure and prosperous future. His legacy may not depend on it. But the climate certainly does.”

With a Republican led Congress, Obama has struggled to push climate legislation through but growing grassroots support for action could change this.

“President Obama’s clarion call to action on the threat of climate change leaves no doubt this will be a priority in his second term,” said Alden Meyer, director of strategy and policy for the Union of Concerned Scientists.

“The politics are shifting rapidly on climate change and clean energy issues, in the wake of the recent drought, wildfires, Hurricane Sandy and other extreme weather events. With presidential leadership, that shift will continue and deepen over the next four years, and meaningful progress on climate change will become an important part of Barack Obama’s legacy as president.”

3/3 Great strong words on #climate at #inaug2013. The US President could not commit stronger to delivering now… #Obama

“Some may still deny overwhelming judgment of science, but none can avoid devastating impact..fires/cripplingdrought/storms” #PresidentObama

Encouraged by #Obama pledge to tackle #Climate in 2nd term. We need US leadership for global solution, which must drive growth #Hope

And civil rights today includes climate change, the intergenerational equity challenge of our time and for each of us.