Glacier melt reached its third highest ever recorded rate during 2010/2011, according the latest data released this week.

The World Glacier Monitoring Service (WGMS), which has more than 100 years of records, found a one metre water equivalent (m w.e) drop in glacier thickness.

“The new data continues the global trend in strong ice loss over the past few decades and brings the cumulative average thickness loss of the reference glaciers since 1980 at more than 15 m w.e,” said the WGMS release, while stressing that this data remains tentative.

The mass balance of a glacier is the total increase or decrease in its thickness once melting, additional bulk from rain and snow and other factors are all combined. 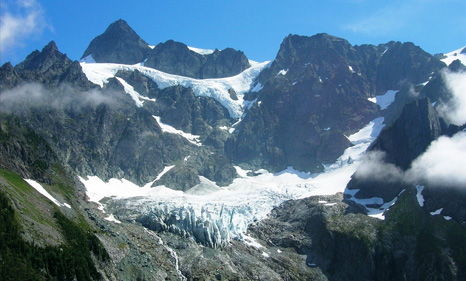 The Lower Curtis Glacier in the US, which added 941mm to its thickness this year. (Source: Flickr/Brewbooks)

“The data provided by the world glacier monitoring service (WGMS) from more than 100 glaciers worldwide provides a clear indication of the continuing cumulative trend in ice mass loss from the world’s glaciers,” said Professor Pete Nienow, glaciologist at the University of Edinburgh’s School of Geosciences.

“The data from the 2010/11 mass balance year indicates the third highest net mass ice loss in the last 32 years and a continuation of the increasingly negative trend in mass balance, so the rate of loss is increasing, during this time period,” Nienow told RTCC.

He added that the findings match-up with those of a recent study into the cumulative ice loss of the Greenland and Antarctic ice sheets.

The melting is not distributed evenly across the earth’s surface however with many US glaciers bulking up during the 2010/11 hydrological year, which runs from October to September.

A number of records have been breached in recent months with an Australian heatwave requiring a new colour band to be added to meteorological maps, a US drought affecting 61% of the country high global average surface temperatures continuing to bunch together in recent years.