The Irish EU presidency has set out its climate and energy priorities for the next six months with the proposed pan-European energy market and climate adaptation at the top of the list.

The theme of the presidency is stability, jobs and growth, indicative of the country’s challenging economic situation and it says the environment will feature across this agenda.

“Ireland will be pursuing an ambitious green thread running throughout its Presidency. Resource efficiency, sustainable development and the advancement of the green economy, with a particular focus on green jobs, will all feature across a range of Council formations,” a spokesperson told RTCC. 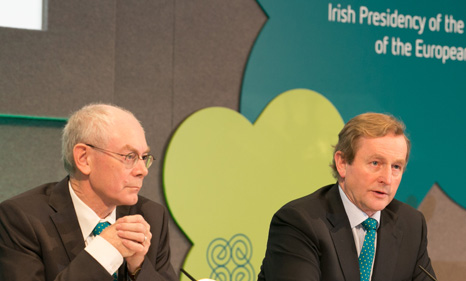 The two environmental priorities are the 7th Environmental Action Plan, the latest dossier of guidelines that have led EU environment priorities since 1971. The second is a European Climate Adaptation strategy.

The presidency hopes that EU’s lawmakers at the European Commission will be ready to publish a proposal as early as March.

The presidency will also look to build momentum for an integrated EU energy market. Vast investment in infrastructure will be required to achieve this, which it is hoped could help stimulate the economy and create new jobs.

“In our opinion safeguarding energy supply through an integrated internal energy market, environmental impact and market deregulation, will determine the future of energy provision in Europe with consequences for business, consumers and growth,” the spokesperson said.

“Increased coordination at EU level can only benefit Europe as Member States move away from traditional carbon-based energy sources to alternative sources, especially renewables. For these reasons our priority files, include Internal Energy Market, Indirect land Use Change (ILUC proposal) sustainability criteria for biomass and safety of offshore oil and gas.”

The creation of a European Supergrid has been touted as one possible means to achieving this. Connecting grids in the north and south would allow excess offshore wind energy in the winter to replace decreasing solar output in the south and vice versa during the summer.

2013 is also set to be a crucial year for its Emissions Trading Scheme. The decision on withholding carbon credits from the market in an attempt to boost the price is expected in the summer.

At the end of the year a decision will be required on the controversial inclusion of aviation in the carbon market if efforts to establish a global platform to deal with greenhouse gases from aviation fail through the UN’s International Civil Aviation Organisation (ICAO).