Is it time to rethink water and energy links in Middle East?

Some 30,000 people from 150 countries have converged this week in Abu Dhabi to discuss energy, water, and how to build a more sustainable and climate-resilient future.

The Arab nations have not historically led on this front, yet this is the third time in nine weeks that they’ve stepped into the spotlight.

In November, Qatar hosted the International Conference on Food Security in Drylands, which highlighted the importance of sustainable water resource management.

Then, while hosting the UN Climate Change Conference in Doha, the government of Qatar announced plans to build 1.8 GW of solar power by 2020. Abu Dhabi, home since 2011 to the International Renewable Energy Agency (IRENA), has set out to produce 7% of its power from renewables by 2020.

But will they make it happen? 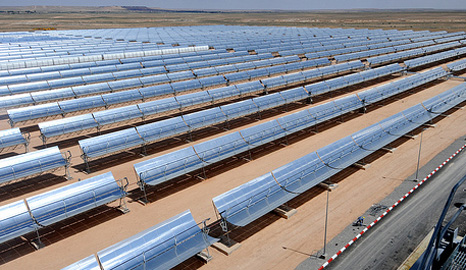 Saudi Arabia recently unveiled an $100 billion plan to construct up to 41,000MW of solar projects over the next two decades – these would replace oil as the main fuel for water plants.

A great deal of our work at the Stockholm Environment Institute entails helping policy-makers envision the future, grapple with uncertainties, and find solutions that are both sustainable, and robust under diverse scenarios of climate change and socio-economic development.

We build models for water and energy systems, looking decades ahead, and evaluate multiple options to achieve the desired goals.

In most places, water and energy are governed separately, but one fundamental lesson of our work is that almost invariably, the two sectors are closely linked.

In water-scarce regions such as MENA, those linkages are even tighter and more challenging. Desalination, a key adaptation measure in the region, for example, is very energy-intensive and can increase Co2 emissions if it uses fossil fuels, as is now the norm; Saudi Arabia alone uses 1.5 million barrels of oil per day for desalination.

Renewable energy sources, including biofuels, hydropower and solar thermal may use large quantities of water, depending on the context and technology.

As part of the GIZ (German Agency for International Cooperation) programme Adaptation to Climate Change in the Water sector in the MENA region, which supports the League of Arab States and national water ministries, SEI is examining linkages between climate, water and energy in these countries.

Our initial analysis, focused on Jordan, Egypt and Lebanon, found many potential tradeoffs and synergies, highlighting how an integrated, “nexus” approach to water and energy planning – and to climate change adaptation and mitigation – could lead to smarter, more resilient development solutions.

Much of Lebanon’s water comes from snow that falls on its mountains and then melts gradually, yet that snowfall could decline sharply: by 40% with 2°C of warming, and 70% with 4°C, according to the country’s Second National Communication to the United Nations Framework Convention on Climate Change.

Because Lebanon is narrow, water also quickly runs off from the mountains into the sea. And coastal aquifers are threatened by seawater intrusion from over-pumping and sea level rise.

Lebanon wants to tap its extensive hydropower potential, but building dams – the most common approach – could divert water from irrigation and urban uses, losing significant amounts of water through evaporation from the reservoirs.

Hydropower is also important for Egypt, supplying 13% of the country’s power, mostly from the Assuan High Dam.

Climate change could seriously compromise storage and hydropower production; Egypt also wants to increase its energy efficiency by 20% by 2022, which will help – but it’s unlikely to suffice given that Egypt’s population is growing by 20% every 13 years.

One promising option for Egypt and other MENA countries is solar-powered water pumps, which are both climate- and energy-smart and take advantage of the fact that highest demands for water pumping (for irrigation) coincide with highest solar insolation in summer.

Treating and reusing wastewater and recovering energy from the sludge would also yield significant benefits; Egypt is ahead of the pack in this regard – the Al Gabal Asfar water treatment plant is nearly energy self-sufficient.

In Jordan, meanwhile, 15% of energy demand comes from the water sector, and desalination would increase this.

While some proposed future energy pathways (e.g. nuclear or mining of oil schists) would be very water-intensive, Jordan has also been proactive in addressing the water-energy nexus, with strategies such as energy‐smart water pumping and energy recovery from wastewater treatment plants.

The Jordan National Water Strategy specifically calls for increased energy efficiency in the water sector and sets a goal of supplying 20% of the power for water pumping from alternative energy sources.

A key first step for the MENA countries is thus to embed “nexus” thinking in their policy-making and resource management, fundamentally changing their approach to water, energy and climate.

A pair of tools from SEI can support integrated analysis and planning: the Water Evaluation And Planning (WEAP) system and Long-range Energy Alternatives Planning (LEAP) system, both of which are well known and used in the region, and can now be used together.

There is also great potential for regional cooperation, in knowledge and technology sharing, joint resource management (as within the Nile basin), and joint initiatives to promote nexus-based solutions.

A regional approach could also open up new finance options, such as enhanced access to global climate funds or the creation of a dedicated MENA climate fund, perhaps through the OPEC (Organization of the Petroleum Exporting Countries) Fund for International Development.

Holger Hoff is a senior research fellow at the Stockholm Environment Institute and author of “Understanding the Nexus”.