China will slash the rate of its greenhouse gas growth by 2030 but its emissions will still rise, according to the latest BP Energy Outlook report.

This will be driven by a combination of energy efficiency improvements and the reduction of coal-intensive heavy industry in the country.

Emissions will continue to rise according to the BP analysis.

The EU and the US will both see their greenhouse gas output fall between 2010-2030 by around 1% and 0.5% respectively. In the same time period China’s emissions will grow by more than 2%. 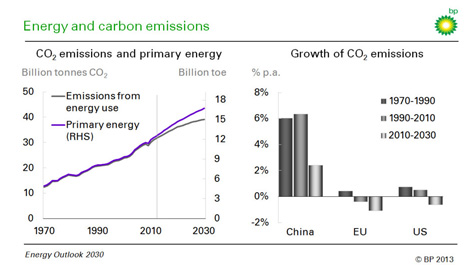 This compares to 6% increases in emissions during each of the previous 20-year periods (1970-1990 and 1990-2010) suggesting that its current climate policy package is expected to have an impact.

Last week the country’s lead climate change negotiator Su Wei announced a drop in intensity of 3.5% for during 2012, keeping the country on schedule to meets its next milestone.

China is also working with the EU to develop regional carbon trading trials as a precursor to a national scheme.