The fate of a global climate deal in 2015 depends on governments implementing ambitious carbon reduction plans at home, the UN climate chief has warned.

Christiana Figueres told a gathering of lawmakers in London that progress at the notoriously difficult UN negotiations will rely on efforts at a national and sub national level to cut fossil fuel consumption and develop renewable energy capabilities.

“Nothing is going to be agreed until enough is legislated domestically,” she said, “and because those two things are inextricably linked, they build on each other and are mutually reinforced.

“And if domestic legislation can identify and optimise your opportunities for growth and increase your competiveness this is a win-win opportunity. 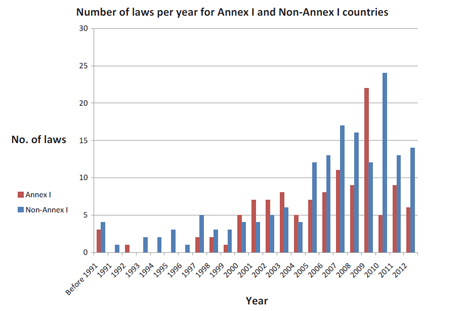 The number of climate laws passed by rich countries, in red, and developing nations, in blue. (Source: GLOBE International)

The Kyoto Protocol is currently the only piece of international legislation that can be described as  truly global.

An extension was agreed at the recent talks in Doha, but critics argue China still has no carbon emission limits, while major ‘developed’ economies such as the USA, Canada, Japan and Russia declined to take part.

In 2011 countries agreed to work towards a global climate deal in 2015, but it is still unclear exactly what this agreement will look like, and observers were left none the wiser after the latest round of UN negotiations in Doha.

The latest Globe Climate Legislation Study, launched at the UK Foreign Office on Monday, indicates that despite deadlock at the UN, on a national basis countries are developing frameworks to cut their use of fossil fuels.

The study reports there are now over 286 pieces of legislation directly relating to the climate, with directives on energy efficiency seen as a popular ‘win-win’ strategy.

Figueres warns that currently there are not enough domestic laws on the ground to ensure the world avoids warming by 2C on pre-industrial levels, a target scientists say is within ‘safe limits’.

The study also reveals that new legislation in developed countries relating to climate change dropped markedly after the 2009 Copenhagen UN climate summit, although there are no suggestions why this is.

The space has been filled by emerging economies such as Mexico and China, who were singled out for particular praise.

However Globe admits that the world’s big emitters need to be far more ambitious in their policies if the world is to avoid heating to dangerous levels.