French President Francois Hollande has been accused of hypocrisy over his commitment to renewable energy and climate change.

Hollande told an audience in Abu Dhabi that a failure to invest in renewable energy would lead to “catastrophe”. This message is in stark contrast to his afternoon appointment with the President of the UAE to lobby for a major oil and gas contract on behalf of French firm Total.

“Although he’s about to launch a national debate on the energy in France, although he reinforced his refusal of shale gas, he keeps on supporting, personally, one of the dirtiest companies in the world and acts as a commercial for climate change,” added Créach. 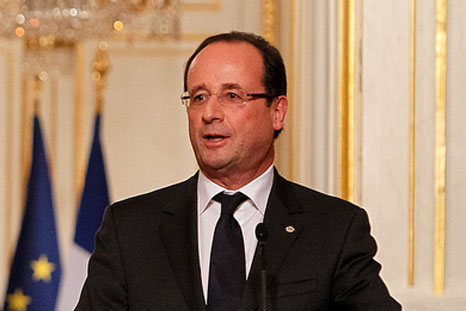 President Hollande has been accused of hypocrisy for touting clean energy and lobbying on behalf of an oil company on the same day. (Source: Flickr/Blog do Planalto)

Speaking at the opening ceremony of the World Future Energy Summit (WFES) in Abu Dhabi, Hollande called for further investment in clean energy.

“If we don’t spend … we will have a catastrophe,” he said adding that without this investment fossil fuel prices will become unaffordable.

He acknowledged the impact of the global downturn but said this should not deter investment in new forms of energy.

“France wants to make the transition in energy resources a national, European and global cause,” he said.

Reuters reported that the President would be meeting with Sheikh Khalifa bin Zayed al Nahyan, president of the UAE to discuss a $10bn deal for Total to develop a logistically difficult gas field.

The successful firm would be the front runner for the 30-year licence to run the oil rich state’s largest oil and gas concession, ADCO, which is up for renewal in 2014.

The visit by Hollande was given much fanfare with France keen to press its environmental credentials.

In a statement released before his visit to Abu Dhabi the French President stressed his “commitment” to reducing greenhouse gas emissions.

“France has offered to host the COP21 and expressed its willingness to cooperate tightly with all the countries, who are ready to work together, notably the UAE, in order to pave the way for the most ambitious agreement possible in 2015 on climate change,” he wrote.

“This trip to the UAE is an opportunity to identify ways the global community can better work together to carve a pathway for sustainability and the deployment of clean energy.”