Countries risk losing out on a £3.3 trillion market if they do not invest in the low carbon economy.

That was today’s message from UK energy and climate chief Ed Davey, addressing the Globe climate lawmakers summit in London.

Yesterday Bloomberg New Energy Finance reported that $268.7 billion had been invested in clean energy projects in 2012, an 11% drop on 2011 but still the second highest on record. 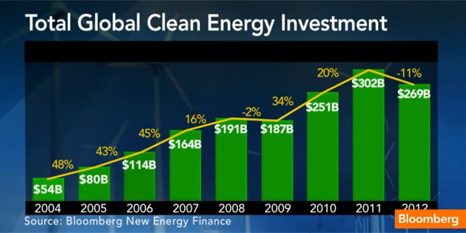 China led the way with $67.7 billion staked in clean energy projects, and Davey argues this is evidence of global political commitment to the green economy.

“This is a boom market of £3.3 trillion, growing at 3.7% a year, with investment in renewables outpacing that in fossil fuels,” he said.

“For our businesses this can mean opportunities, for our government’s tax revenues, for our people jobs, for our societies insulation from the volatility of fossil fuel prices.

“So this drive for low-carbon energy can be a real engine of growth for hard-pressed economies around the world.

“And key to driving this growth are legally binding targets.”

Despite these positive messages, the low carbon economy is still facing intense pressure from critics who argue investment in clean energy places too much cost at the door of consumers.

Davey is currently embroiled in a long-running battle with members of the UK governing coalition over the country’s long-term energy strategy, in particular over the £110 billion planned investment in the low carbon energy sector.

Members of Parliament debated the latest UK Energy Bill in Parliament this week.

Its stated aim is to keep the lights on and long term prices down – but has already received intense criticism from MPs who believe the UK is paying too high a price to decarbonise its economy.

Davey says he welcomes the debate – but calls for all parties to recognise the seriousness of the threats posed by climate change.

“I’m all for rigorous opposition,” Davey said, “but there are some issues that have a long term, strategic impact on our nation, and our world.

“The climate security of our nations and our planet definitely falls into that category.

“In these instances, we have to rise above cheap, knee-jerk, short-term political opportunism and forge a consensus that spans the political groups in our societies.”